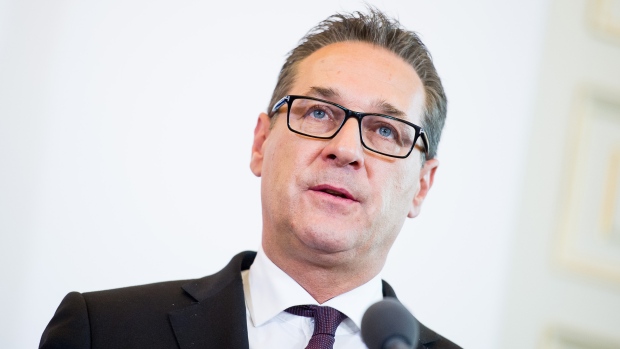 VIENNA, AUSTRIA - JULY 05: Austrian Chancellor Sebastian Kurz (not pictured), German Interior Minister Horst Seehofer (not pictured) and Austrian Vice-Chancellor Heinz-Christian Strache speak to the media after their meeting at the Federal Chancellery on July 5, 2018 in Vienna, Austria. Seehoher is in Vienna to discuss the implementation of his plans for new immigration measures on the German-Austrian border that will require the cooperation of Austrian authorities. (Photo by Michael Gruber/Getty Images) , Getty Images

The probe centers on the appointment of Freedom Party’s Peter Sidlo to the management board of Casinos Austria AG, a lottery and casino operator in which the Austrian government and Novomatic own stakes, a Casinos Austria spokesman said, confirming a report in Austrian newspaper Der Standard. Casinos Austria isn’t a target of the probe, he said.

A spokesman for the white-collar prosecutors’ office in Vienna confirmed that raids took place Monday in relation to a graft investigation. The prosecutors suspect six individuals and one gambling company, he said. He declined to elaborate, citing the confidentiality of the investigation.

Novomatic Chief Executive Officer Harald Neumann and owner Johann Graf are among those being probed, Der Standard said. A spokesman for Novomatic declined to comment.

Sidlo didn’t immediately return an email seeking comment. He was also appointed to the Austrian central bank’s supervisory board by the Freedom Party last year. The Freedom Party said it would comment later Tuesday.

Strache resigned as vice chancellor and Freedom Party Chairman in May, following the release of a video in which he was shown promising state contracts for cash to a woman claiming to be a Russian oligarch’s niece and plotting the takeover of Austria’s largest newspaper.

Conservative Chancellor Sebastian Kurz, who had governed in a coalition with the Freedom Party, was toppled a few days later, and Austria will now have an election Sept. 29.

To contact the reporter on this story: Boris Groendahl in Vienna at bgroendahl@bloomberg.net

To contact the editors responsible for this story: Chad Thomas at cthomas16@bloomberg.net, Christopher Elser, Anthony Aarons