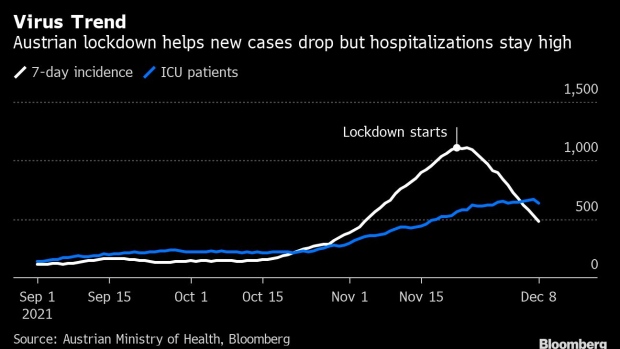 A police car patrols a pedestrianized shopping street in Vienna, Austria, on Monday, Nov. 22, 2021. Austria has again entered a nationwide lockdown and Germany is no longer ruling out a similar move as Europe grapples with a brutal wave of the coronavirus pandemic. Photographer: Akos Stiller/Bloomberg , Bloomberg

(Bloomberg) -- Austria will keep a range of regional pandemic restrictions in place after ending a nationwide lockdown for inoculated people, with strict limits affecting the unvaccinated.

The government in Vienna is ending a three-week lockdown on Sunday for most people after a decline in confirmed infections, even as the number of patients being treated at hospitals remains high. The move contrasts with a flurry of new measures being enacted elsewhere in Europe in response to concern over a new coronavirus variant.

Austria has been at the forefront of European efforts to raise vaccination rates by favoring the inoculated and putting limits on others. While only a fraction of those who had previously not taken the jab have sought the inoculation as a result of the policies, the government is betting on continued curbs to boost the vaccination rate.

Unvaccinated Austrians will still be required to stay at home except for going to work, doing essential shopping and taking daily exercise. For others, the government will allow non-essential shops and services to reopen from Sunday, according to national guidelines presented by Chancellor Karl Nehammer on Wednesday. In principle, restaurants will also be allowed to resume in-person dining until 11 p.m. each day, while nightclubs will stay shut.

The policy risks hardening a rift in society between citizens who have taken the vaccine and others who reject it. Plans to make vaccines mandatory from February have sparked protests across the country. The radical Freedom Party, the only group in parliament to oppose targeted restrictions, has called a demonstration in Vienna for Saturday.

“I understand that this policy feels arduous for the unvaccinated, but they have the opportunity to get a shot,” Nehammer said.

The relaxations of the curbs for the inoculated coincide with the emergence of the omicron strain of the coronavirus, and may lead to tougher measures being reintroduced, something policy makers are keen to avoid, Vienna Mayor Michael Ludwig said at the same press conference.

“We can’t yet estimate what kind of impact the new variant will have, but the new wave is coming,” he said.