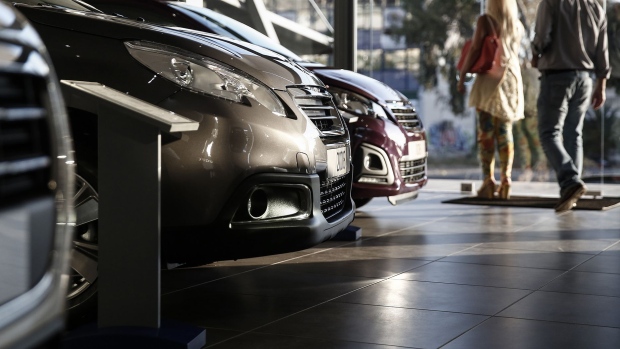 Customers exit after viewing vehicles at a dealership in the Glyfada district of Athens. , Photographer: Yorgos Karahalis/Bloomberg

Global light vehicle sales fell 7% in May, dragged down by a 16% decline in the Chinese market and stagnation in the U.S. and Europe, research firm LMC Automotive said in a report. “The global automotive industry is enduring a sustained downturn not seen since the Great Recession,” the report said.

Sales volumes in the U.S. are being propped up by commercial fleet purchases thanks to the Trump administration’s 2018 tax reform, but a flood of off-lease vehicles and steadily rising vehicle prices will crimp demand going forward, Bank of America Merrill Lynch analyst John Murphy said at a event in Detroit Wednesday. Meanwhile, global automakers who expect the Chinese market to improve in the second half are being too optimistic, he said.

The pace of sales declines in China is “still quite a bit shocking, and what’s equally shocking is a lot of companies are simplistically thinking this will stabilize in the second half of the year,” Murphy said. That kind of optimistic appraisal “is a little bit concerning for companies making large capital commitments that we all know are five plus years out,” he said.

To contact the editors responsible for this story: Kevin Miller at kmiller@bloomberg.net, Chester Dawson