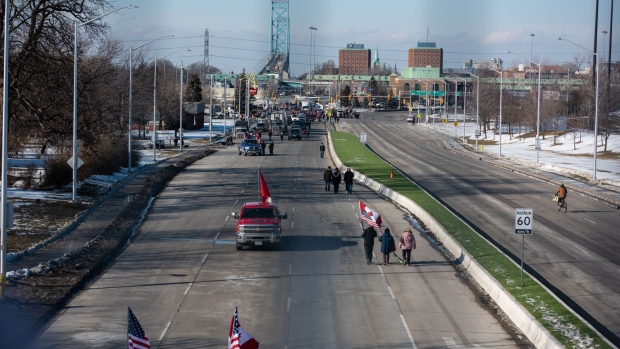 Vehicles and protesters block access to the Ambassador Bridge during a demonstration in Windsor, Ontario, Canada, on Wednesday, Feb. 9, 2022. Protesters blocking traffic between the U.S. and Canada to oppose vaccine rules are further stretching an auto supply chain already worn thin by pandemic-related labor shortages and a scarcity of chips. , Bloomberg

(Bloomberg) -- Stay on top of the electric car revolution by signing up to our Hyperdrive newsletter here.

The anti-vaccine protests choking off a critical trade route between the U.S. and Canada this week are just the latest drama for an auto supply chain increasingly fraught with tension.

First, there’s the chip situation. If you thought we were headed for some kind of linear improvement, consider Ford’s fourth-quarter earnings. The company had a massive beat in the third quarter due to an influx of chips, only to miss by a wide margin in the last three months of the year  because of a lack of semiconductors and Covid-related shutdowns roiling its suppliers. Sales will drop in the first quarter as a result, Ford said.

Nonetheless, Ford sees earnings before interest and taxes rising as much as 25% this year to as much as $12.5 billion, thanks to a rich mix of vehicle sales and an expectation that chip supply will improve in the second half. General Motors posted strong profits because of fat prices, in spite of the semiconductor shortage, Chief Financial Officer Paul Jacobson told investors last week.

To survive so much production uncertainty and fund their multibillion-dollar electrification plans, automakers are preserving what limited components they have for their most profitable vehicles, and charging top dollar for cars in short supply. That makes sense for car companies, but it’s putting an extra strain on the supply chain, especially smaller firms that invest capital up front to make low-margin parts, then wait months or even years for production to ramp up to high enough volumes that they can make a buck.

At the same time, automakers are pressuring suppliers to eat the extra shipping and logistics costs it takes to make and deliver parts. This is a dance as old as the industry itself, but now that Covid-relief loans from the government have expired and pandemic absenteeism and chip shortages are driving up inflation, tensions are pushing some companies to the brink, said Ann Marie Uetz, a lawyer at Foley & Lardner in Detroit who represents suppliers. She’s been working on a lot of exit agreements lately, where suppliers ask to be released from a vehicle program because they’re losing money on the parts, she said.

“Owners will put money into a company for a period of time, when there’s an end game, when you see it’s going to turn a corner,” she said. “They’re not just going to keep building parts at a loss for their customers.”

Jeep maker Stellantis caused a backlash last month when it dropped new contract terms on its supply base. Among the sticking points were a provision that said suppliers must fork over all cost savings to the automaker, as well as rights to any intellectual property they develop, according to Jeff Aznavorian, president of Clips & Clamps Industries, a third-generation metal-forming company in Plymouth, Michigan.

“I don’t think the North American auto industry has ever seen terms and conditions this one-sided,” said Aznavorian, whose company supplies Stellantis. “I don’t really expect them to enforce every provision of it, because if they did, we’d all be out of business.” Stellantis declined to comment on the supplier contract terms, which were first reported by Automotive News.

Automakers are coming through a period where they’ve seen their century-long dominance of the supply chain upended — they can’t get all the chips they want no matter how much fist pounding, lawsuits, or presidential lobbying they employ. At the same time, they’re being forced to vertically integrate more to secure the batteries and software expertise they need to keep up with Tesla.

Wall Street is also watching this tension, and it sees risk for suppliers in carmakers’ penny-pinching.

“Things are pretty, pretty good for the automakers right now,” Joseph Spak, an analyst at RBC Capital Markets, wrote in a note this week. “A rethink of the supplier/OEM relationship terms are likely needed” to allow “for more equitable sharing” of price gains or cost burdens, he said.