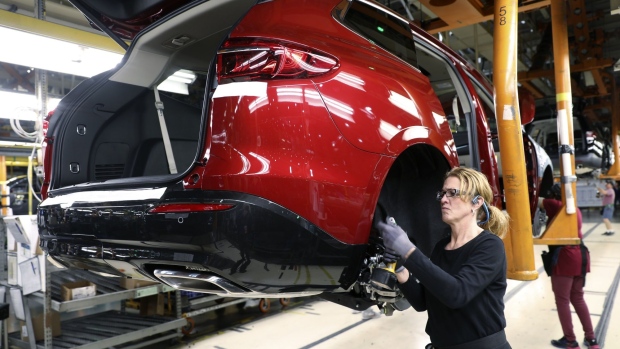 An employee installs components on a vehicle at the General Motors Co. Lansing Delta Township Assembly Plant in Lansing, Michigan, U.S., on Friday, Feb. 21, 2020. The plant started production in 2006 and employs over 2,500 workers over two shifts. , Bloomberg

General Motors skirted a strike this week that could have affected production of some of its most profitable vehicles. Details of the agreement with about 700 subsystem workers, who deliver parts to the assembly line, aren’t yet public and still have to be ratified. But the close call and tough talks offer a glimpse of what could be coming next year, when GM, Ford and Stellantis negotiate new four-year contracts for their roughly 150,000 US employees represented by the United Auto Workers.

While companies from Amazon to Apple have been raising wages in a tight labor market to attract workers and fend off unionization, the three Detroit-area automakers have been somewhat insulated from wage inflation, at least at the low end of the pay scale. This is a result of their having locked in labor costs with their last contracts in 2019.

As widespread price increases erode wages, this could be a recipe for “a tough negotiation and potentially a strike” next year, Joe Spak, RBC Capital Markets’ auto analyst, wrote in a May report.

But what about recession risk — could that lead union workers to think twice? Well, the semiconductor shortage that’s stymied auto production and drained dealer lots to about a third of their normal inventory suggest that, even if we’re headed for a recession, there’s lots of restocking to do and pent-up demand to meet. Automakers also are going to have a hard time pleading poverty when they’re commanding record vehicle prices and making big profits.

“Typically, we would be heavy stock, high incentives, increasing incentives to try to move vehicles, large inventories. We don't have that today,” John Lawler, Ford’s chief financial officer, said at a Deutsche Bank conference last month. “It's a completely different environment heading into what could be a potential recession than anything I've seen in the past.”

Another factor to consider: automakers have committed billions to launch a barrage of new electric models and build battery assembly plants in the US, and they’re not going to drop those long-term investments. Remember, when Elon Musk reportedly wrote that he had a “super bad feeling” about the economy, President Biden touted Ford’s then just-announced plan to hire 6,000 new union workers to staff its plants.

Getting someone to work in an auto plant can be a hard sell. It’s dirty, it’s hell on your body, and the hours can be brutal. The compensation for those sacrifices has traditionally been reflected in union contracts: a living wage, generous health-care plans and retirement benefits, and ideally enough money left over for a summer cottage along the Great Lakes.

But since 2007, when the UAW conceded to a two-tier wage system to help Detroit compete with foreign carmakers, not every UAW employee has been able to have that dream. It was arguably the sticking point in the 2019 strike at GM and continues to be an issue.

Stellantis’s starting temp wage is $15.78, Ford’s is $16.67, and GM’s is between $15 and $16. If you’re just looking at base pay — which, significantly, does not include things like health-care benefits, vacation days and profit-sharing checks — it seems comparable to Amazon’s $18 average hourly wage for new US hires (though that varies by region). Apple just raised retail wages to $22 from $20 to fend off unionization campaigns.

In what looked like a proactive attempt to address these labor dynamics, Ford said last month it would voluntarily upgrade 3,000 temps to full-time employment, on top of hiring another 6,200 in Michigan, Missouri and Ohio to build more electric Mustangs, mid-size pickups and commercial vans. A Ford spokeswoman said the company wants to attract, retain and motivate workers and reward them appropriately.

Volkswagen, which is in the midst of adding 1,000 new people to its Chattanooga, Tennessee plant, has given workers a 10% raise and paid new hires $3,000 signing bonuses. The company now starts people off at $21.10, or $22.60 if you take a night shift, with another 8% bump for showing up regularly. It’s also hiring temp workers at $19.72 an hour, a spokeswoman said. Employees top out at $33 an hour, a smidge above the current top wage in the UAW contract (VW fended off a unionization campaign in Chattanooga three years ago).

Johann De Nysschen, the chief operating officer of Volkswagen of America, told me once VW can get someone in the door, it has an advantage over employers like Amazon, which has a warehouse across the street from the plant. The automaker offers upward mobility and a long-term career path.

But some people just don’t want a factory job.

At Stellantis’s new Jeep plant in Detroit, the use of temp workers is surging, partly because there’s so much absenteeism. People are calling in sick with Covid or simply needing a break from irregular shifts and long work weeks, one union rep told me. Another called the company’s truck plant in Sterling Heights, Michigan, “a revolving door.”

Stellantis held several hiring halls in June to help staff the assembly lines at its SUV plants in the Motor City. I went to one of them and met Tamika Robinson, who was sitting in her car waiting for a friend. Both her mother and brother work at Ford, but Robinson isn’t interested in an auto job — she works as a health care analyst and an at-home caretaker.

“Ford and Chrysler used to be where you wanted to work, because they were paying great amounts of money for the work they were asking people to do,” she said. “But now, to pay people $17 to $18, it’s below the cost of living. And you mandate overtime for people so they can’t enjoy their families.”

Her friend, Mario Byrd, a laborer who’s coming off a stint building pods for Amazon warehouses, was more positive. He was enticed by Stellantis’s profit-sharing plan.

“My cousin’s been here for five years. Before, he didn’t have a car, he didn’t have anything, and he has it all now — because he goes to work every day,” Byrd said. “It’s an incentive to get a piece of the big pie.”