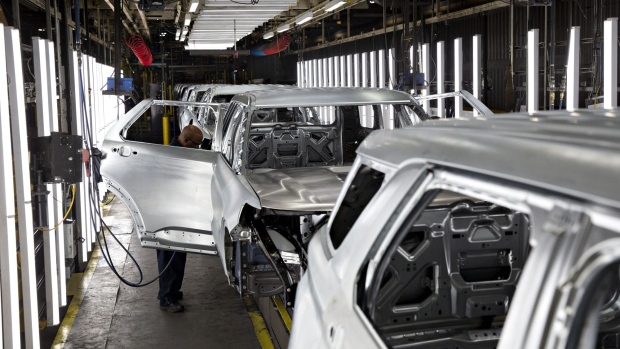 American auto demand is coming back faster than expected and quickly clearing trucks from dealer lots, spurring Ford Motor Co. to crank up production of its highly profitable F-150 pickup in Michigan this week.

The ramp up has some workers on edge, despite the extra money they stand to earn from the overtime and extra Saturday shifts Ford is adding at its Dearborn, Michigan, truck factory.

The local union has already filed a grievance calling for the company to do more to protect workers from COVID-19.

“People will be working in close proximity for more hours per week,” said Gary Walkowicz, a recently retired United Auto Workers official who helped lead the grievance at Ford’s truck plant last month. “You saw what happened in the meatpacking plants where people are crowded together. You’ve had large outbreaks and people are dying.”

The situation in Dearborn is a microcosm of an industry entering the next phase of its reopening -- where factories that restarted production four weeks ago are speeding up assembly lines again.

So far, the carefully laid plans Ford and its peers crafted are working. Isolated cases have led to plants briefly idling for deep cleaning, but the companies have avoided major outbreaks.

What workers fear is that the holes in the companies’ safety nets will be exposed as production volumes pick back up.

By quickly restoring shifts at pickup and SUV plants, Ford and General Motors Co. are putting at risk the hard-fought labor peace they reached after a roughly two-month shutdown.

“Demand for production is very enticing, but it has to be done in a way that you’re not doing it on the backs of the workers,” said Celeste Monforton, a public health lecturer at Texas State University who has studied the outbreaks at meat and poultry plants.

The UAW local in Dearborn is demanding that production be halted until every worker is tested. Another F-150 factory in Missouri last week accused the company of “backsliding” on safety protocols.

The union’s senior leaders haven’t directly weighed in on those complaints but are pushing automakers to increase testing and adjust as they learn more about the risks of the virus.

“A widespread outbreak hasn’t happened yet, but these next couple of weeks are really the test,” said Kristin Dziczek, vice president of industry, labor and economics for the Center for Automotive Research.

Ford says everything is going to plan. It isn’t aware of any worker contracting the disease inside its plants, and no quarantined employee has ended up testing positive.

“The process is working and the demand is there, so we’re starting to ramp up,” Gary Johnson, Ford’s chief manufacturing officer, said in an interview. The company won’t put workers at undue risk to boost production, he said.

GM has had positive cases in its plants since it began producing personal-protective equipment in early April, Jeff Hess, the automaker’s chief medical officer, said in an interview. He said 49 people have quarantined as part of the carmaker’s contact-tracing program, and none of them developed COVID-19.

Still, as GM boosts production, the risk of infection remains.

“We have had employees that have the disease, which we feel is a community-acquired disease, not factory-acquired,” Hess said. “The more people we have coming into our facilities, the more likely we’re going to have individuals who’ve been exposed in the community who could potentially bring the disease into the plant.”

The automakers are requiring employees to fill out daily health-screening documents, taking their temperatures with thermal scanners and mandating safeguards such as face shields for those who are in closer contact with colleagues.

In some cases, work spaces also have been redesigned for social distancing. Occasional pauses of production to clean after workers test positive also have become the new normal.

“Until we have a vaccine that’s out there 100 per cent and more testing is available over the next few months, then I think we’ll still have cases,” Ford’s Johnson said.

“If asymptomatic cases are as prominent as people say, you will get inadvertent exposure,” said Amesh Adalja, an infectious disease doctor who specializes in pandemic policy. “It’s very hard to guard against and it’s an open, ongoing issue.”

The makers of the thermal scanners that have become ubiquitous at factory entrances also acknowledge their equipment isn’t foolproof.

“Infrared cameras do not detect COVID, they do not detect diseases and, if I am being honest, they don’t definitively detect fever,” said Chris Bainter, director of global business at Flir, which has supplied thermal cameras to 72 GM facilities. “They detect elevated body and skin temperature and, measured in the right location, it’s a good correlation to core body temperature.”

Safety experts still praise automakers and the UAW for the steps they’ve taken, including their policies to keep paying workers who test positive or go into quarantine.

Those benefits aren’t afforded to non-unionized workers in other sectors.

“The meat-processing plant workers are in very close proximity to each other,” said Sanchoy Das, professor of mechanical and industrial engineering at the New Jersey Institute of Technology. “Auto plants, for the most part, are pretty clean and well-maintained.”

When automakers first attempted to reopen plants, UAW President Rory Gamble pushed back, telling executives they should only call workers back when they are comfortable sending in their own children.

Last week, Ford postponed the reopen of offices for salaried employees. But the carmaker says it changed plans in part to free up supply of protective equipment for factory staff.

“If we get a mini outbreak at a plant or a spike in frequency of cases, you might see further pushback from the union,” said Jeff Schuster, senior vice president of forecasting for LMC Automotive.

And the risk of infection will only increase as states lift stay-at-home orders. Infection rates inside plants are likely to track closely with the spread in surrounding areas.

“As long as there is incidence in that community, you have to assume every day that somebody is walking into this plant who may be carrying the virus,” Das said. “You cannot let your guard down.”