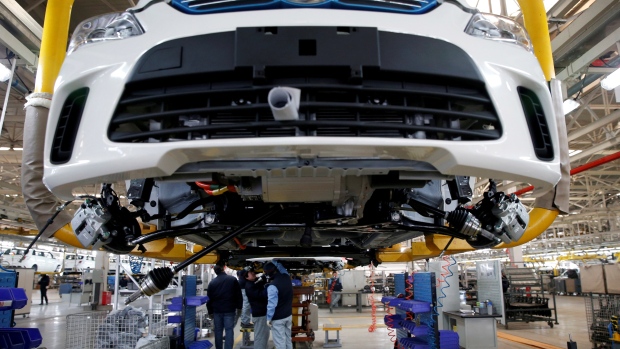 SHANGHAI  - China's auto industry is charging ahead with aggressive plans to electrify cars even as policymakers scale back subsidies aimed at building sales from relatively low levels and consider tapping the brakes on sales quotas for plug-in cars.

Industry executives will use the Shanghai Motor Show, which opens to the public on Friday, to show off numerous battery electric and plug-in hybrid models. But behind the scenes, many are worried that batteries capable of delivering the same driving range as gasoline cars are still too expensive.

While green energy car sales have risen dramatically on the back of government policies, making China the world's leading market in this segment, electric cars have otherwise generated little consumer interest. They make up less than 2 per cent of China's overall auto market of 28 million vehicles sold last year.

Beijing's central government has floated proposals to require automakers to substantially boost sales of so-called "new energy vehicles" (NEVs), or risk being penalized. But at the same time, it is cutting subsidies on green cars by a fifth this year, a move that could deepen manufacturers' losses on such models and discourage consumers from buying them.

Policymakers say reducing subsidies gradually to 2020 will wean automakers off government support and create a self-sustained market for electric vehicles. Industry officials and experts reckon tightening fuel efficiency regulations through 2020 will compel car makers to rely more on electrification to boost average fuel efficiency despite the drop-off in subsidies.

Industry executives say long term, they expect China will insist on more electric vehicles, and to be ready, they must invest in developing those vehicles now.

"We're not holding back anything. The requirements whether they get changed or adjusted or whatever, the bottom line is clear that electrification is going to play a bigger and bigger role ... in China and other markets as well," Ford Motor Co (F.N) CEO Mark Fields told reporters at a pre-show event this month.

Industry executives expect Beijing to ask automakers operating in China ultimately to generate green car credits equivalent to 12 per cent of annual sales volume with NEVs by around 2020, with each green vehicle getting a different number of credits depending on the level of electrification and driving range.

Automakers and government officials have been bargaining over China's electric vehicle policy for years.

In the latest draft policy released in September, Beijing proposed a requirement that they generate credits equivalent to 8 percent of automakers' sales next year by selling battery electric or plug-in hybrid vehicles, rising to 10 per cent in 2019 and 12 per cent in 2020. More recently, the government has indicated that timetable could slip.

Whatever target the government sets, automakers would have little choice but to comply. China is the world's biggest auto market by far, and growth is set to continue this year, albeit at a slower 5 per cent, according to the China Association of Automobile Manufacturers.

That is why even as automakers fight electric vehicle mandates in the United States, they are scrambling to develop more plug-in electric hybrids and electric battery cars for China.

Ford, for example, says that by 2018 it will launch in China a plug-in hybrid sedan called the Mondeo Energi, a version of the low-volume Ford Fusion Energi offered in the United States. It also plans to bring an all-electric sport-utility vehicle to China over the next five years.

General Motors Co (GM.N), one of the largest automakers in the Chinese market, plans to launch at least 10 NEVs by 2020. To support the growth of its NEV line-up, GM has built a battery assembly plant in Shanghai which should be ready to deliver battery packs next year.

Volkswagen plans to have 13 additional NEVs by 2020 based on its current generation of technology, following on plug-in hybrid versions of the Phideon sedan, due to be unveiled later on Tuesday, and the Audi A6L sedan. The VW brand aims to further launch 10 electric vehicles between 2020 and 2025.

The German manufacturer also hopes to form a joint venture just for NEVs with Anhui Jianghuai Automobile Group (JAC) <600418.SS>, and any models from that partnership would be on top of those plans, a spokesman told Reuters. VW said in January the first VW-JAC car could be produced next year.

China's drive for electric vehicles, driven in part to combat often suffocating urban smog, has put pressure on Japan's Toyota Motor Corp  to re-think its earlier scepticism about battery-electric technology. Toyota has said it will locally build plug-in hybrids and sell them in China, starting in 2018, although it has not said when all-electric car models would hit Chinese showrooms.

To be sure, even as automakers renew commitments to produce more NEVs, it's not clear how aggressively they would push those cars in the marketplace.

"All automakers in China are still trying to understand the implications of the more stringent fuel efficiency regulations and whether to increase production of qualifying NEVs or purchase NEV credits from other automakers, including their partners," said James Chao, Shanghai-based Asia-Pacific chief of consulting firm IHS Markit Automotive.