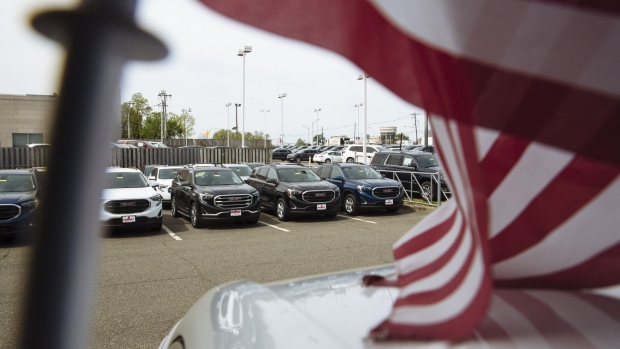 (Bloomberg) -- Automakers posted higher sales in the first quarter as General Motors Co., Toyota Motor Corp. and others benefited from strong demand for new cars and trucks in comparison with a year earlier, when the spread of Covid-19 shut showrooms.

U.S. auto sales surged by more than 8% in the quarter, according to analysts’ estimates. The gain reflects buying as vaccination rates increase and more people return to their pre-pandemic routines. Increased confidence in the economy and worry about lower supplies of cars due to chip shortages also helped boost deliveries.

Read more: Buyers Snap Up New Cars, Even If They’re the Wrong Color

GM’s sales increased 3.9% in the quarter to 642,250 vehicles, led by demand for sport-utility vehicles such as the midsize Chevrolet Traverse and full-size Cadillac Escalade. That offset declines in the Chevy Equinox and GMC Terrain compact crossover SUVs after Ontario and Mexico plants for those models were idled because of a lack of computer chips.

Despite the scarcity of critical semiconductors, GM expects a solid year of growth. It projects the annualized selling rate for the industry will hit 16.7 million vehicles, which is above the average analysts’ estimate of 16.5 million.

“Consumer confidence and spending will continue to increase due to stimulus, rising vaccination rates and the progressive reopening of the economy,” Elaine Buckberg, GM’s chief economist, said in a statement. “Auto demand should remain strong throughout the year.”

The global semiconductor shortfall is draining dealer lots of cars and trucks -- and forcing buyers to pay more to secure a new set of wheels. New-model inventory available at U.S dealerships fell 36% in March while average transaction prices rose 5% to an estimated $40,563, according to automotive researcher Edmunds.

“The chipset shortage has snowballed into a bigger crisis,” Jessica Caldwell, executive director of insights at Edmunds, said in a statement. “Retail customers are being offered fewer choices and paying higher prices.”

Sales of Toyota’s full-size Tundra pickup were flat in March compared with a year earlier, reflecting a prolonged shutdown of its assembly line at a plant in San Antonio, Texas. Never the most popular vehicle in the automaker’s lineup, the Tundra has borne the brunt of the semiconductor shortfall.

But overall, Toyota reported a healthy 22% jump in quarterly sales -- including a striking 87% surge in March -- to 603,066 vehicles. Buyers flocked to its best-selling RAV4 crossover SUV and popular Tacoma midsize truck. The Japanese company’s Lexus luxury brand reported its second-highest volume ever for the first quarter and best ever for March, led by sales of the RX sport-utility vehicle.

The auto industry has retail buyers to thank, since multivehicle corporate clients largely disappeared at the height of the pandemic and have remained bit players in recent months. Fleet purchases -- often at discounted rates -- fell about 30% in the first quarter, according to analysts’ estimates.

That reflected lower demand from rental car and other fleet buyers, as well as dwindling vehicle supplies as automakers prioritized higher-margin retail sales. But there are signs that the dearth in fleet business may be close to bottoming out.

“I can tell the economy is starting to rebound because our rental car partners are really aggressively asking us for more vehicles,” Randy Parker, Hyundai Motor Co.’s top sales executive in the U.S., said in an interview. “So what that tells me is the rental car side of the business is really starting to pick up.”

Hyundai’s deliveries rose 28% in the first quarter to 167,130 vehicles, with the Tucson compact SUV leading the way. But less than 10,000 of those went to fleet buyers.

Nissan Motor Co. is also optimistic that multivehicle buyers will start to become more of a presence in the sales picture.

“Fleet is definitely coming back. We will try to do our part to give them some inventory, but we’re going to focus on retail,” Judith Wheeler, Nissan’s vice president for U.S. sales, said in an interview.

The Japanese automaker reported a gain for the first time in nine quarters, with a 10.8% increase to 285,553 vehicles. A 45% jump in deliveries of its Rogue crossover SUV accounted for almost one-third of total deliveries as the brand attempts to rebuild. Unlike its upscale competitors Cadillac and Lexus, Nissan’s Infiniti brand saw no upswing -- sales crashed 25% to less than 20,000 vehicles.

Rival Honda Motor Co. posted a 16% increase in first-quarter deliveries to 347,091 vehicles and set a new March sales record. Demand for its best-selling CR-V crossover SUV more than doubled in March and buyers took a shine to a refashioned Ridgeline pickup, with sales more than tripling last month.