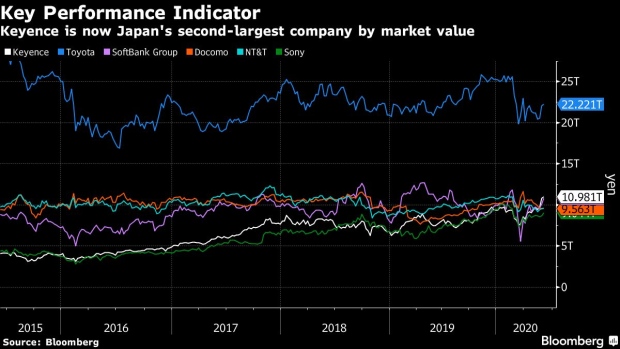 (Bloomberg) -- It’s the rise of the robots: Japan’s second-largest company is now a maker of industrial automation systems, highlighting the rising importance of a less visible sector to a nation long associated with consumer-facing brands.

Keyence Corp., a maker of machine vision systems and sensors for factories, has jumped 17% this year to become Japan’s second-largest company by market value. At a valuation of almost 11 trillion yen ($100 billion), it has overtaken telecommunications giants SoftBank Group Corp., and NTT Docomo Inc., which have jostled for the honor to sit behind Toyota Motor Corp. over most of the past decade.

Keyence is famed for its dizzying profitability with an operating profit margin of more than 50%, among the country’s highest. That’s enabled by its “fabless” output model, according to analysts, with production of its array of pressure sensors, barcode readers and laser scanners outsourced to avoid high capital costs.

Its industry-leading sales system creates bespoke solutions for clients, and its frequently listed as the highest-paying company in Japan. The surge in its shares has also benefited founder Takemitsu Takizaki, who has overtaken SoftBank’s Masayoshi Son by a good margin to become Japan’s second-richest man.

“It’s got everything — high growth, high dividends and a high operating margin,” said Norihiro Fujito, chief investment strategist at Mitsubishi UFJ Morgan Stanley Securities Co. “It’s the type of long-term stock you want to leave to your kids or your grandkids.”

Keyence has more than tripled in market value since early 2016. That’s underscored how important the country’s parts and robot makers have become to the stock market, shown in the weighting of companies that make up the the country’s benchmark Topix index.

Japan stocks were once dominated by banks and automakers — but years of zero rates which now dip into negative have hurt the profitability of the former, while the importance of the latter was declining even before the coronavirus sent the industry into reverse gear.

The weighting of the Topix’s Electrical Appliance sector, also home to the likes of Sony Corp., Murata Manufacturing Co., and Fanuc Corp., has increased to almost 15%, the highest in about a decade, as the importance of the Banks and Transportation Equipment sectors have declined. The Information and Communication sector, headed by the five listed companies that dominate Japan’s mobile carriers, is the second-most heavily weighted segment.

The growing presence of IT shares has also been a feature in the U.S. stock market, with the sector making up the highest proportion of the S&P 500 Index since the dot-com bubble burst. The coronavirus pandemic has amplified a trend for investors to prefer companies that eliminate humans from the process — a trend Keyence benefits from both with its fabless production model, and by enabling companies to automate their own production.

Founder Takizaki holds about 23% of Keyence’s shares, Bloomberg-compiled data show. For the Topix, which takes the free float of the shares into account in its weightings, those holdings mean Keyence is less heavily weighted than Sony, whose market value trails by comparison. Toyota the biggest company on the index, and even forecasting an 80% drop in profit this year, the automaker remains Japan’s largest business with a market value double that of Keyence.

“We like Keyence as it outsources production instead of owning factories, allowing it to focus on R&D,” HSBC analysts including Helen Fang wrote in a May 26 report that initiated coverage of the company with a buy rating. “It also uses a direct-sales model that keeps it close to clients. This strategy means it can better capture market share in a widening array of industries and can focus on high-value client solutions.”

While the coronavirus pandemic will depress profits this year, Nomura sees a recovery “to record-high profit levels” the following year and sees a record profit the next, analyst Masayasu Noguchi wrote in a report May 28 raising its target price on the stock.

Factory Automation in Asia May Be First to Recover From Pandemic

The notoriously tight-lipped Osaka-based company does not provide earnings guidance in its sparse quarterly disclosure. It’s an outlier in a country where companies are being encouraged to boost their transparency and communication with the market.

“They are an efficiency-above-any-other kind of company, so doing extra that doesn’t result in revenue addition is probably less of a priority,” said Bloomberg Intelligence analyst Takeshi Kitaura. “They think generally those following the company are happy when they manage solid earnings and growth.”

Yoshiharu Izumi, an analyst at SBI Securities Co., says that Keyence holds talks with shareholders and that reassures investors. “The fact that Keyence has overtaken Sony, which is extremely proactive in responding to shareholders, reflects that reality,” he said. “When Keyence starts putting energy into disclosure, that might be the time to sell.”