Canadians are continuing to pay more for rent, with prices climbing by almost 12 per cent in October, according to a report by Rentals.ca.

In its latest report, the Toronto-based rental company said the average rent rose 11.8 per cent in October compared to a year ago. On a monthly basis, the average rental price increased 2.2 per cent from September.

The average monthly rent for all property types hit $1,976, which was $209 more compared to the same month a year ago. 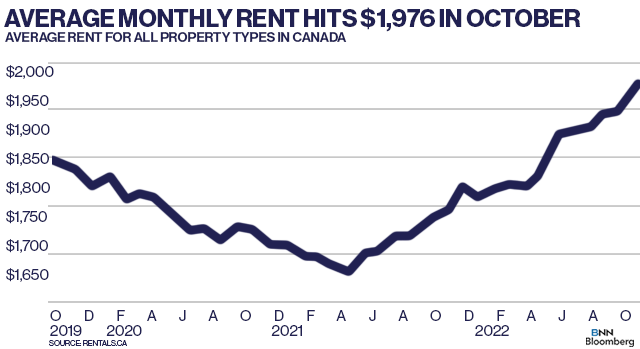 This marked a seven per cent increase from the pre-pandemic high of $1,845 in October 2019.

While Vancouver is the priciest rental market, prices have slipped by 3.5 per cent over the past two months after reaching a high of $3,083 in August.

On a regional basis, monthly rent increased the most in Atlantic Canada.

The average rent for a purpose-built and condominium apartment increased by 32.2 per cent year-over-year, to an average of $2,199 per month.

This was a significantly larger increase than any other Canadian province, with Ontario coming in second at 17.7 per cent, followed by British Columbia at 15.1 per cent.