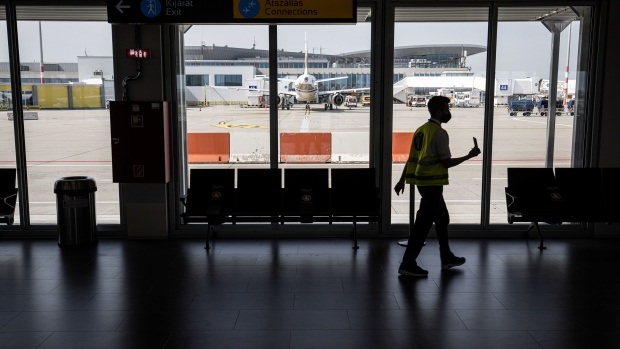 A member of ground crew at a gate at Budapest Ferenc Liszt International Airport in Budapest, Hungary, on Wednesday, Aug. 4, 2021. The Hungarian government has made a non-binding offer to buy Budapest Airport, according to people familiar with the matter, as Prime Minister Viktor Orban seeks to gain control of what had been one of the fastest growing hubs in the region before the coronavirus pandemic. Photographer: Akos Stiller/Bloomberg , Bloomberg

(Bloomberg) -- AviAlliance, a Germany-based airport management company which is the biggest shareholder in Budapest Airport, said it entered formal talks with the government of Hungary about the sale of the hub.

The decision to start the due diligence process followed a revised offer on the part of Prime Minister Viktor Orban’s cabinet, which has made the purchase of the airport a priority.

“This time, the price offered by the Hungarian government for the take-over of the airport obliged us and our shareholders to consider it in the long-term interests of our funds,” according to an AviAlliance statement on Monday. “While this is potentially the first step towards the sale of the airport, we want to emphasize that the outcome of such a process is not predetermined.”

A Hungarian government-led consortium has offered 4.44 billion euros ($5.1 billion) for full control of Budapest Airport, Vilaggazdasag business daily reported on Oct. 19. Orban wants to sign a purchase agreement this year and close the deal by March 31, days before general elections, according to the report. The state would have at least a 51% stake in the airport as part of a consortium but is also ready to take full ownership, the newspaper said.