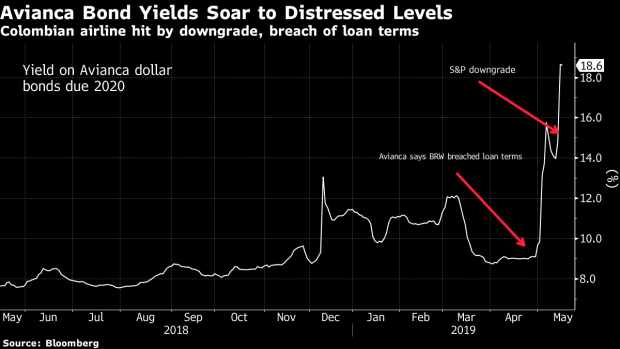 S&P Global Ratings this week cut the airline deeper into junk, to CCC+ from B, and warned of “higher refinancing risk.”

At the end of April, the airline said that BRW Aviation, which owns a majority of outstanding shares, had breached terms of a loan with United Airlines, which could trigger a clause allowing United to take control of BRW’s stake. The airline’s CEO, Hernan Rincon, also quit last month.

“The refinancing risk leaves the company dependent on favorable economic conditions to meet its financial commitments despite the management’s progress toward completing a potential refinancing of the notes,” S&P said in its report. “However, if end-market demand deteriorates or financial markets weaken, we believe Avianca would face difficulties securing new financing.”

BRW Aviation Holding holds 78% of Avianca’s common shares, representing 51.5% of total outstanding shares. It is a subsidiary of Synergy, a company indirectly controlled by brothers Jose Efromovich and German Efromovich.

To contact the reporter on this story: Matthew Bristow in Bogota at mbristow5@bloomberg.net

To contact the editors responsible for this story: Matthew Bristow at mbristow5@bloomberg.net, Sebastian Boyd