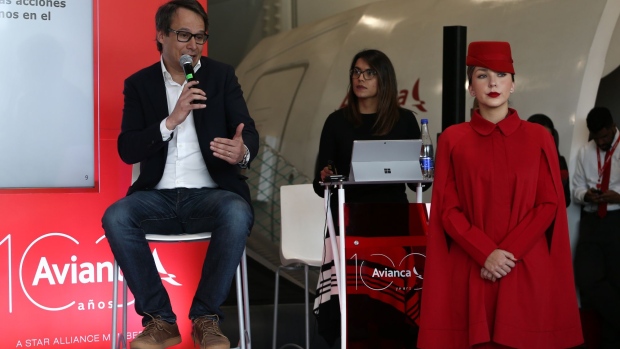 Adrian Neuhauser, chief financial officer of Avianca Holdings SA, speaks during a press conference at the company's operational training center in Bogota, Colombia, on Thursday, Aug. 29, 2019. Avianca is seeking "very high" participation in offer to exchange $550 million of bonds due in May for guaranteed debt that would automatically convert into new bonds with longer maturities. , Bloomberg

(Bloomberg) -- Avianca Group International Ltd. is emerging from bankruptcy with plans to compete with low-cost carriers on price while keeping parts of the business that made it Latin America’s second-largest airline before the Covid-19 pandemic hit.

Chief Executive Officer Adrian Neuhauser said the company was able to slash debt and build up liquidity during an 18-month Chapter 11 reorganization that it exited this week. It will add more seats on planes and use the point-to-point route structure made popular by low-cost airlines rather than relying on flying through its hubs.

“We’re trying to take the best of what we were, a service-focused legacy carrier with a broad route network, and combine it with what we’ve seen our competition do which has been very effective: to offer more point-to-point and offer lower prices,” Neuhauser said in an interview. “We’re very focused on being disciplined and on cost.”

Colombia’s largest airline is now owned by a group of creditors that extended it a financial lifeline during the bankruptcy process. The new owners include Kingsland Holdings, which is controlled by Salvadoran mogul Roberto Jose Kriete Avila, and billionaire Ken Griffin’s hedge fund Citadel LLC. United Airlines is also a creditor in the group, but its debt has not been converted into equity yet, Neuhauser said.

The restructured company, which is now domiciled in the U.K. but operates out of a Bogota headquarters, will be closely held until management decides where to list the stock, he said. The company is considering a single listing in either the U.K. or the U.S., but it has yet to decide.

The company filed for bankruptcy in May 2020 after governments closed borders to contain the spread of the coronavirus. Latam Airlines and Grupo Aeromexico followed it into U.S. Chapter 11 reorganization. Avianca, the first of the three to exit the process, will have around $1.2 billion in liquidity and about $3.5 billion of long-term debt including rolled over loans it took while in bankruptcy and aircraft leases, Neuhauser said.

Neuhauser expects the company to post a profit in 2023 after its operations return to pre-pandemic levels. The airline is flying at about 60% of its pre-covid schedule, with domestic business rebounding faster than long-haul flights, especially international business travel, he said.

In response, Avianca is changing its fare offerings and seat arrangement to provide more flexibility, he said.

“We’re designing it to be more focused on leisure and less on business. That doesn’t mean we’re leaving behind our traditional business client, but it does mean we’ll shrink the business cabins and things like that,” he said. “A lot of international business travel before the pandemic was consultants, bankers, et cetera, and we just see that recovery a lot more slowly.”