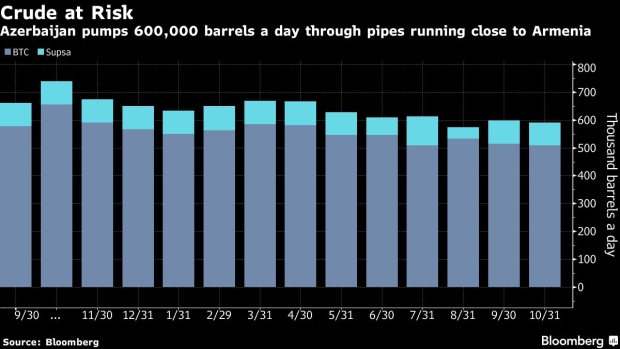 (Bloomberg) -- With weeks to go before Azerbaijan is due to start piping gas to the European Union, a decades-old conflict with its Eurasian neighbor Armenia is flaring up again.

So far, oil and gas markets have yet to be spooked by the conflict -- perhaps because global energy demand was drastically reduced by the Covid-19 pandemic, meaning producers the world over have spare capacity should the worst-case scenario arise -- the bombing of the pipeline and an ensuing environmental disaster. In normal times, a material disruption would likely boost energy prices.

The conflict centers on the Nagorno-Karabakh region claimed by both countries. In theory, it has the potential to disrupt oil and gas flows from Azerbaijan, since export pipelines from the Caspian Sea region’s second-biggest crude producer run within just 10 miles of its border with Armenia.

Azerbaijan exports the vast majority of its crude oil through the Baku-Tbilisi-Ceyhan pipeline to an export terminal on Turkey’s Mediterranean coast. Additional volumes are pumped to the Black Sea port of Supsa in Georgia. Natural gas exports flow through the South Caucasus pipeline to Georgia and Turkey, and are due to reach EU markets later this year. All three run in parallel through Azerbaijan.

Most of the oil and gas pumped through the lines is produced by two consortia led by BP Plc, which lift oil from the Azeri, Chirag and Gunashli fields and gas from the Shah Deniz deposit in the Caspian Sea. Small volumes of crude from Kazakhstan and Turkmenistan on the eastern shore of the Caspian are also pumped through the BTC pipeline. It has a capacity of 1.2 million barrels a day, but carries less than half that in practice. Another 80,000 barrels a day flow to Supsa.

Azerbaijan also pumps gas through an export pipeline that runs alongside its oil conduits. In 2019, the country delivered 9.2 billion cubic meters (325 billion cubic feet) of gas to Turkey through the South Caucasus Pipeline. That line is part of the 4,000 km, U.S.-backed, Southern Gas Corridor, which cost BP and partners around $40 billion to build. Azerbaijan is due to begin gas deliveries to Italy and Greece through the line next month. Those flows could meet abut 3% of the EU’s gas imports, although the bloc has ample sources of alternative supplies.

While the proximity of the pipelines to the border puts them at potential risk, Armenia has not attacked the lines during previous escalations in the conflict between the two countries, which has been simmering for almost 30 years.

Importantly, the coronavirus has led to a surplus of oil and gas production capacity worldwide. Oil demand will be 7.1% lower this quarter than it was a year earlier, according to the International Energy Agency. Nations including Saudi Arabia and Russia responded to that weakness by pumping less crude, but if called for, they could easily bring those barrels back onto the market.

Back in June, the IEA was predicting a 4% drop in gas consumption this year, twice the decline seen during the 2008-09 financial crisis. That only exacerbated a glut that already existed because of excess supply.

Buried up to two meters below the ground, the pipelines wouldn’t make easy targets, and Armenia would certainly be blamed for any environmental damage resulting from a breach.

In 2008, Georgia’s National Security Council claimed the BTC line was targeted by Russian missiles, an allegation Russia denied. An earlier attack on the line in Turkey, claimed by the Kurdistan Workers’ Party, or PKK, closed the line for several weeks in the same year.

Azerbaijan has few alternatives to ship its crude, and none for its gas. Some oil could be sent for export via a pipeline to Russia, but that would depend on being able to strike a deal with its northern neighbor, which has traditionally sided with Armenia in the conflict over Nagorno-Karabakh.

Oil markets, though, don’t seem particularly worried by any potential disruption to exports of Azeri crude, with Brent crude little changed on the day and volumes low. Natural gas futures are similarly becalmed.

Ample supplies in the Mediterranean of the type of light, sweet crude produced by Azerbaijan may be helping to mitigate oil-market concerns. Those supplies could rise further in the coming weeks if Libya succeeds in boosting flows as a result of a political truce in its civil war.