VICTORIA -- British Columbia is trying to more directly target urban areas with changes it announced Monday to a proposed tax on property speculation after some municipalities demanded exemptions and the Opposition accused the New Democrats of grabbing family assets.

Finance Minister Carol James is also adjusting the tax rate after first announcing details of the levy in the budget last month.

The changes would create a number of exemptions and shift which areas of the province would be covered by the tax.

Under the details announced by James, the tax would apply to properties in Metro Vancouver, Kelowna, West Kelowna, Nanaimo-Lantzville, Abbotsford, Chilliwack, Mission and the Capital Regional District around Victoria on southern Vancouver Island, excluding the Gulf Islands and Juan de Fuca.

Do you think B.C.’s planned speculation tax will achieve its intended purpose?

The speculation tax is intended to improve housing affordability in areas where the need is most acute, while exempting rural cabins and vacation homes, James said.

"We have a responsibility as a government to ensure that hard working British Columbians can afford to call this province home," she added.

The changes are due to be introduced in legislation this fall.

"Over 99 per cent of British Columbians will not pay the tax," said James. "Only those who hold multiple properties and leave them empty in our province's major cities will be asked to contribute."

In 2018, the rate for all properties subject to the tax would be set at 0.5 per cent of a property's assessed value, regardless of whether the owner is foreign, Canadian or from B.C.

Starting in 2019, the tax rate would be set at two per cent for foreign investors and extended family members.

For Canadian citizens and permanent residents who do not live in British Columbia, the tax rate would rise to one per cent of a property's assessed value next year.

James said people who rent out their second property for at least six months of the year will not have to pay the speculation tax.

"The speculation tax focuses on people who are treating our housing market like a stock market," she said. 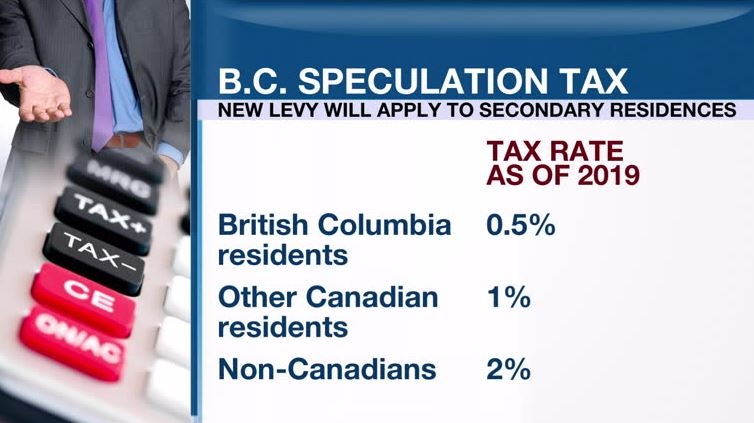 James said the government estimates the tax will generate about $200 million in revenue next year.

Liberal Leader Andrew Wilkinson said the minority NDP government appears to be taking a trial and error approach to tax policy, which does not inspire confidence.

"They seem to think they can attack speculation with a tax that is not about speculation," he said.

Green Leader Andrew Weaver said the changes "go a long way" to dealing with his party's concerns about the tax.

"In particular, the government's policy must target speculation and empty homes in our urban centres without undue adverse effects on rural areas and on British Columbians who aren't speculators," he said in a news release.

"They make it much more targeted and limit the effects on British Columbians with vacation homes."