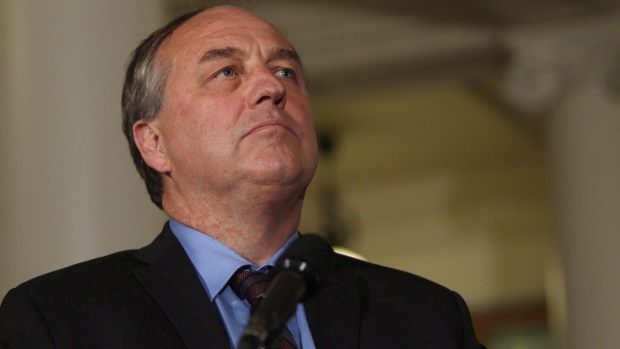 VICTORIA -- B.C. Green Leader Andrew Weaver, who led the party to a historic election breakthrough two years ago, will not seek re-election in the next provincial election.

Weaver reduced his work schedule as he recovered from labyrinthitis after he suddenly had symptoms typical of the condition last month, but in announcing his decision to not run again in 2021 he cited his aversion to becoming a career politician for stepping down.

He has asked the party to begin the process to elect a new leader.

The province's minority NDP government remains in power with the support of the Greens, but Weaver's decision will not immediately affect the New Democrats' hold on power because he will remain on the opposition benches of legislature.

The B.C. Liberals have 42 seats in the house, the NDP 41, the Greens three seats and there is one Independent, former Liberal Darryl Plecas, who serves as house Speaker.

The 57-year-old Weaver is an internationally recognized climate scientist who was first elected to the legislature in the Victoria-area riding of Oak Bay-Gordon Head in 2013.

He has been a University of Victoria professor for more than 20 years and has authored or co-authored over 200 peer-reviewed papers.

He became leader of the party in 2015 after becoming the first Green to win a seat in the legislature.