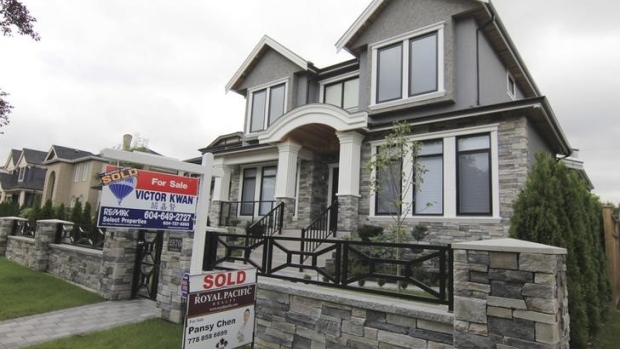 Realtors' signs are hung outside a newly sold property in a Vancouver neighbourhood, September 9, 2014. , REUTERS/Julie Gordon

The British Columbia Real Estate Association has released its 2018 first quarter housing forecast, showing residential sales are expected to fall 8.6 per cent to 94,855 units this year, with the decline continuing into 2019.

The projected skid follows the 7.5 per cent decrease recorded last year but the association says residential sales in B.C. are still well above the 10-year average of 84,800 units.

Strong employment growth, consumer confidence and more workers moving to B.C. are credited for the booming housing market over the last four years, including 2016, when a record 112,209 homes changed hands.

But the association predicts the pace of sales will cool due to several factors, including a five-year qualifying rate for a mortgage that is forecast to reach 5.70 per cent by the fourth quarter of 2019.

The association also notes the supply of homes for sale continues at, or near, decade lows in most B.C. regions but it says 60,000 new homes are now under construction, well above the 2008 high of 45,000 units.

"Slowing consumer demand combined with a surge in new home completions over the next several quarters will create more balance in the housing market and produce less upward pressure on home prices," the association says in its release.