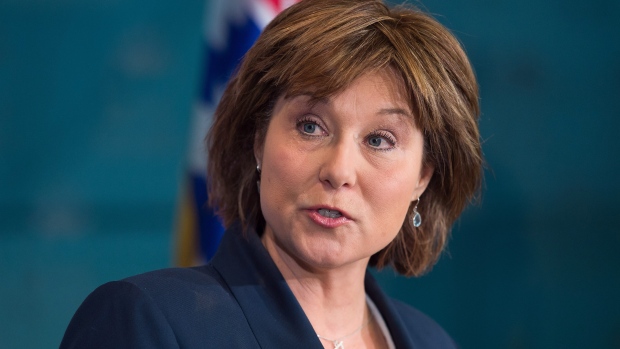 British Columbia Premier Christy Clark responds to the federal government approval of the Kinder Morgan Trans Mountain Pipeline expansion project, during a news conference in Vancouver, B.C., on Wednesday November 30, 2016. Prime Minister Justin Trudeau approved the $6.8-billion project that will nearly triple the capacity of the pipeline that carries crude oil from near Edmonton to the Vancouver area to be loaded on tankers and shipped overseas. , The Canadian Press/Darryl Dyck

In exchange for environmental approval of Kinder Morgan’s (KMI.N) Trans Mountain expansion, Clark struck a deal whereby the Texas-based company will pay the Canadian province tens of millions of dollars every year for as long as two decades. The agreement, which Clark described as “unprecedented”, has established a precedent the incoming President of the United States could easily use to extract more cash from a major Canadian company.

Trump declared his support for the controversial Keystone XL pipeline – backed by Calgary-based TransCanada (TRP.TO) – nearly a year ago while the bombastic billionaire was still running for the Republican Presidential nomination. Approval from a future Trump administration, the then-candidate warned, would come at a cost.

“I want the developers of [Keystone XL] to give the United States a big, big chunk of the profits or even ownership rights, like I do in business, that’s what I do,” Trump demanded during a January 2016 campaign speech in Muscatine, Iowa, adding he intended to ask for “25 per cent of the profits, forever.”

That specific percentage may be open for negotiation, but the odds of Trump demanding – and receiving – at least some level of revenue from TransCanada should he allow the roughly US$10 billion project to move forward have just increased dramatically. Under the agreement between B.C. and Kinder Morgan announced late Wednesday, the province will receive between $25-million and $50-million from the company every year for up to 20 years, potentially reaping the province a $1-billion long-term windfall.

TransCanada has twice attempted to win presidential approval to build the 1,351 km U.S. portion of the 1,880 km pipeline. Current U.S. President Barack Obama rejected the first proposal in 2012 but invited the Canadian company to reapply if it could propose an alternate route that avoided the ecologically sensitive Ogallala Aquifer. TransCanada’s second proposal, which avoided the Midwestern water table, was rejected by Obama in November 2015.

By then, the estimated cost of the project had nearly doubled to US$10 billion and TransCanada was subsequently forced to take a $2-billion (Canadian) charge for the money it already spent preparing to build the pipeline. In June, the company launched a legal challenge through the North American Free Trade Agreement (NAFTA) demanding US$15 billion in compensation from the U.S. government.

Not only has Trump made a pledge to renegotiate NAFTA a centrepiece of his campaign platform, he also confessed he was “not in love with the idea of taking Canadian oil” during the same Iowa speech where he set his terms for Keystone XL approval.

In response to questions from BNN, TransCanada declined to comment on the possibility of any government revenue-sharing agreement regarding Keystone XL, with a spokesperson saying via email the company was “sensitive and respectful to the fact that the federal government is in transition.”

“As such we will not be speaking about the project at this time, other than to reiterate that we remain committed to [Keystone XL],” the spokesperson said.