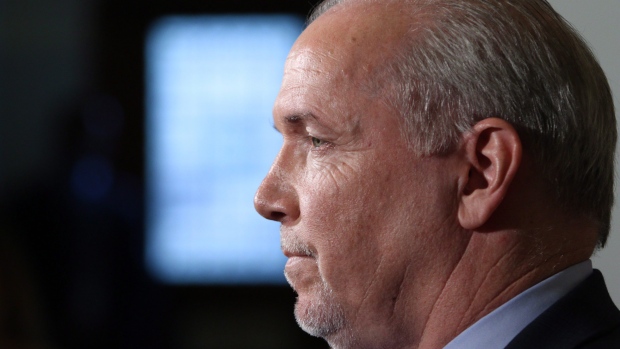 Premier John Horgan answers questions about the Alberta dispute during a press conference at the Legislature in Victoria, B.C., on Wednesday February 7, 2018. , THE CANADIAN PRESS/Chad Hipolito

VICTORIA -- British Columbia Premier John Horgan doesn't intend to respond to any provocation from Alberta in the escalating trade dispute over the Trans Mountain pipeline.

Horgan said Wednesday it is not in anyone's interests to fuel the spat between the two provinces.

"I hope that we would see the end of the back-and-forth," he told a news conference in Victoria. "I deliberately wasn't available to you yesterday because I don't think it's in anyone's interests to have duelling premiers."

The B.C. government is looking at restricting the expansion of bitumen through the province until it's satisfied a spill can be cleaned up, which was countered by the threat of a lawsuit from Alberta along with a ban on B.C. wine imports.

More details on the B.C. government's intentions are expected by the end of the month, Horgan said.

He said officials from Ottawa will meet with deputy ministers from the B.C. government on Thursday to clarify the province's rights over the jurisdictional dispute.

"It's not the government's intention to respond in any way to the provocation," he said. "We're going to focus on the issues that matters to British Columbians and hope that cooler heads on the other side of the Rockies prevail."

While the dispute between B.C. and Alberta simmered Wednesday, reaction continued to boil.

Ian Anderson, the president of Kinder Morgan Canada Ltd., called on Ottawa to step into the dispute over the company's pipeline expansion project between Edmonton and Burnaby, B.C.

"I think that asserting their federal jurisdiction in whatever manner they determine is most effective and most appropriate is something I'll be looking for, so that we get past the words of support, to the actions of support that we're all chasing hard," he said.

Trudeau said talks continue out of public sight with the provinces.

"We're making sure we come to the right place that's in the national interest for Canada," he said.

Premier Rachel Notley's announcement on a ban on B.C. wine imports Tuesday came after her government's decision to stop electricity talks with B.C.

Anderson said he sent a letter this week to Horgan about his concerns for the province's plans and its implications for the $7.4-billion Trans Mountain project that would almost triple the capacity of the pipeline.

"We are calling on the premier to think very serious about the severity of the actions and the path that they're undertaking here. I don't think anyone is missing the agenda that they're pursuing."

Speaking in French after a government caucus meeting in Ottawa, Environment Minister Catherine McKenna suggested solutions are being worked on behind the scenes.

In Victoria, Horgan said while he and Notley may both be New Democrats, that is a secondary consideration.

"It's well know that premier Notley and I have been friends in the past. It's well known that we share the same political flag," he said. "But at the end of the day, that's secondary to my obligations to the people of British Columbia."

The two other Western provinces expressed concern about the trade dispute between neighbours.

Saskatchewan Premier Scott Moe backed Alberta in its fight but he cautioned against additional trade measures that hurt consumers and private businesses.

"Saskatchewan has no plans to participate in retaliatory measures that would be in contravention of our trade commitments," he said on Facebook.

Manitoba Premier Brian Pallister promoted open trade among the provinces as well in a statement, noting that the National Energy Board and the federal cabinet approved Trans Mountain after determining it was in the national interest.

"This uncertainty is decidedly unhelpful to economic development in Western Canada and for the general well-being of the Canadian federation," said Pallister.

"Whether it's a pipeline or a transmission line, markets and investors need certainty. They don't react well to either overlapping processes or backward steps."