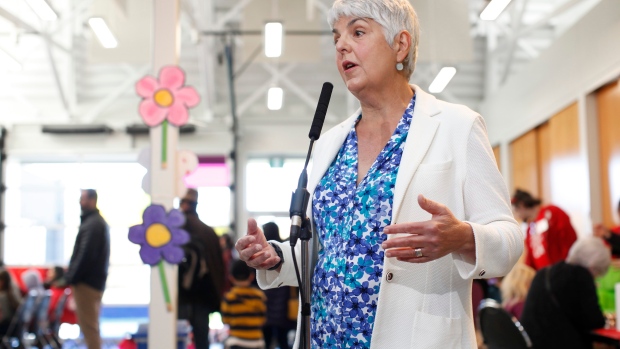 Minister of Finance Carole James answers questions from the media as she takes part in activities during the Family Arts Festival at the Cedar Hill Recreation Centre on Family Day in Victoria, B.C., on Monday, February 17, 2020. , THE CANADIAN PRESS/Chad Hipolito

VICTORIA -- The B.C. government is forecasting budget surpluses for the next three years, but the provincial debt is expected to jump by $17 billion by the end of the 2022-23 fiscal year.

The debt is forecast to be about $70.6 billion at the end of this fiscal year, climbing to about $87.6 billion in 2022-23, which includes the amount of debt carried by Crown corporations.

The government says in its budget released Tuesday that the increase is due to borrowing costs to cover the money it's spending on infrastructure, with capital spending pegged at $22.9 billion over the next three years.

"It is sustainable," said James. "In fact, British Columbia is in a very enviable position when it comes to debt."

The budget says the amount spent on interest by taxpayers to cover the debt represents about 3.1 per cent of the government's revenue, which is the lowest it has been in more than 10 years.

The amount of debt being carried by the province as a ratio of its GDP is expected to remain steady over the course of its financial plan.

By those measurements, James said: "Both of those are very affordable."

James says the government is projecting lower economic growth rates than private-sector forecasters to be prudent.

The budget forecasts GDP growth in 2020 at two per cent, slightly higher than its previous projection of 1.9 per cent. The average growth rate for the 2022 to 2024 period is also projected at two per cent.

James said she is also monitoring the impact of the novel coronavirus on the provincial economy, including its effect on tourism to the province.

The government says private-sector forecasters see B.C. being among the provinces that leads real GDP growth in 2020 and 2021, with the province leading the country last year with the lowest employment rate. It says more than 45,000 jobs were added in the private sector in 2019.

The Business Council of British Columbia chided the government for not adequately preparing for a softer economy.

"While government has prioritized a variety of worthwhile program areas, including childcare, housing affordability, education, transit and transportation investments, paying for this requires a competitive and growing economy," Jock Finlayson, the council's executive vice-president ad chief policy officer, said in a statement.

"The budget does not pay sufficient attention to the storm clouds facing us due to slower global growth and escalating tax and regulatory costs at home."