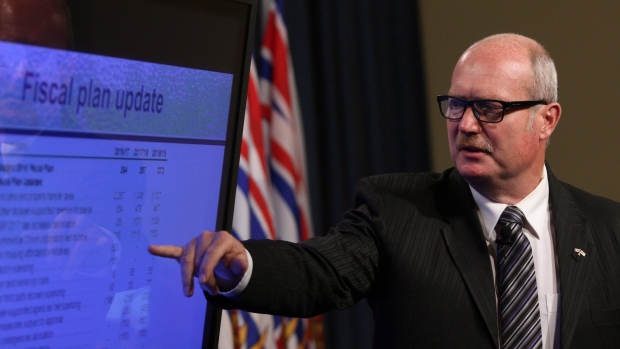 British Columbia Finance Minister Michael de Jong provides an update on the province's finances at a press conference at the Press Gallery at the Legislature in Victoria, B.C., Thursday, September 15, 2016. , THE CANADIAN PRESS/Chad Hipolito

"Suffice it to say, it's been a pretty good year so far," said de Jong. "We were forecasting a surplus of $264 million. There's now a surplus forecast of $1.94 billion. We're in this position -- the envy of the country really -- because we've taken a balanced approach and haven't gone on spending sprees," de Jong said.

The greatly improved financial forecast comes just months before a provincial election in which B.C.'s Liberals are seeking a fifth consecutive mandate.

De Jong didn't say how much had been generated so far by the foreign buyers tax, but added that figure would be released next week.

The government has been under pressure much of the past year to take measures to address Vancouver's overheated real estate market, prompting the Liberals to introduce a 15-per-cent foreign buyers tax in July.

"There's no question the market in the Lower Mainland, in Metro Vancouver, in other parts of B.C. has been growing at a pace that ultimately the government thought was unsustainable and warranted intervention," de Jong said. "And we did."

The financial update forecasts 40,000 annual housing sales, with foreign buyers making up five per cent of that number.

De Jong said the government will use $500 million from the property-tax windfall to fund a housing affordability initiative to be announced next week.

"The government really wants you to believe everything is fine in B.C. but for many, many families they are struggling," she said.

James said it's ironic that the government's increased property transfer tax revenues are largely a result of its failure to tackle the issue of out-of-control housing prices years ago.