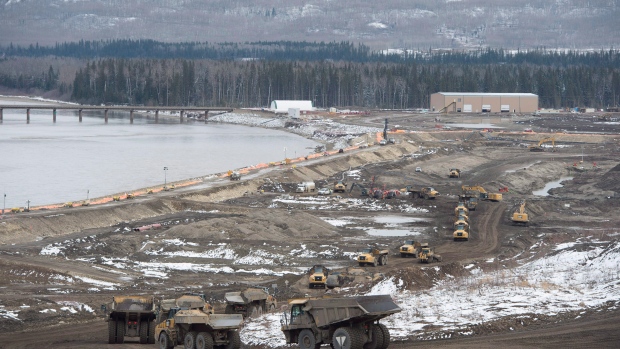 The Site C Dam location is seen along the Peace River in Fort St. John, B.C. , The Canadian Press/Jonathan Hayward

VICTORIA - The cost of British Columbia's Site C hydroelectric dam has grown by $6 billion, bringing the price tag of the megaproject to $16 billion and stretching the completion date to 2025.

The provincial government says the skyrocketing expenses are due to construction setbacks, geotechnical issues, COVID-19 and other cost and schedule pressures.

Premier John Horgan's announcement comes weeks after a former deputy finance minister completed his report on the status of the northeastern B.C. dam and submitted the study for cabinet consideration.

The review was ordered last July after Crown-owned BC Hydro reported concerns about risks and delays, and the province says it has accepted all 17 of Peter Milburn's recommendations, including a strengthened project assurance board.

The government also released a review by two independent experts that found changes to the foundation to address geotechnical issues on the project's right bank will ensure Site C meets safety standards.

The province says terminating Site C now would mean an immediate writedown of about $10 billion, which would result in an average 26 per cent increase in BC Hydro rates over the next 10 years if covered by ratepayers.

It says continuing with the project means the costs will be recovered through rates over the 70-year lifespan of the dam.

Horgan also announced new leadership at BC Hydro as Doug Allen - who has held top positions at the Insurance Corporation of British Columbia and TransLink - replaces Ken Peterson as chairman of the board.

The premier said in December 2017 that the NDP government would reluctantly support completion of the dam across the Peace River just west of Fort St. John, but he would never have started the project commissioned by the previous B.C. Liberal government.