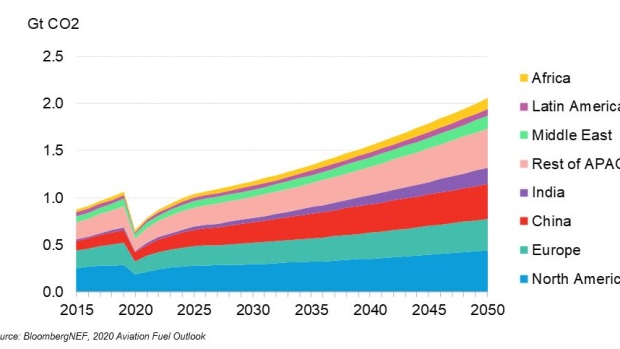 (Bloomberg) -- British Airways operated what was billed as a “carbon neutral” flight this week between London and Glasgow, as it tries to burnish its green credentials in the lead-in to next month’s COP26 climate summit in Scotland.

While it was a lower-emissions flight, the attempt by IAG SA’s flagship airline to apply a zero-carbon label exposes the problems that the aviation industry faces in cutting emissions while also trying to meet demand set to resume following the coronavirus pandemic.

The aviation industry has no silver-bullet solution to the growing emissions problem. Planes can only become so much more fuel efficient until a new generation of hydrogen technology arrives. In the meantime, there’s not enough supply of sustainable aviation fuel, and a lack of transparency means it’s unclear whether offsets are actually helping to cut emissions.

“Zero-emission aircraft are still on the drawing board, and sustainable aviation fuel is only available in tiny quantities,” said Matt Finch, U.K. policy manager at campaign group Transport & Environment. “Neither will be widely available till the 2030s, and yet the industry is touting these as a way to decarbonize now.”

The trip to Glasgow ahead of COP26, which starts Oct. 31, was a redux of a similar one BA took in 2010, using an Airbus SE A321. Billed as the Perfect Flight, it went from London Heathrow to Edinburgh, and highlighted the savings available in fuel and emissions through route optimization. In 2021, BA is used a newer, more-efficient A320neo powered with a blend of 35% SAF mixed with conventional kerosene.

Emissions were 62% lower on this week’s flight, BA said. It attributed a 34% drop to using aircraft with more-efficient engines and operational improvements, while sustainable aviation fuels caused a 28% reduction. The biggest chunk -- 38% of emissions -- came from carbon offsets.

“This flight offered a practical demonstration of the progress we’re making in our carbon reduction journey,” BA Chief Executive Officer Sean Doyle said in a statement.

A spokeswoman for BA declined to comment beyond the statement.

To bill the Glasgow flight as carbon-neutral, BA purchased what it called “high-quality, verified carbon offsets” to counter the impact of fossil-fuel use.

Offsets involve funding measures such as forest protection, energy-efficiency projects or wind farms. Experts warn against the use of cheap ones, where it’s impossible to be sure carbon was removed from the atmosphere to neutralize the flight’s remaining emissions.

Some carriers, including United Airlines Holdings Inc., reject using carbon offsets at all.

“It cannot scale to the size of the global problem,” United CEO Scott Kirby said in a Wall Street Journal interview posted on Twitter. “If we planted every acre on the planet that can theoretically grow trees, it would account for less than 5 months of mankind’s carbon emissions, and then we’re done.”

Why ‘Carbon Offsets’ Don’t Do All That They Promise: QuickTake

Before the pandemic, the flight-shaming movement was already calling on airlines to pull back on flights. While automakers and the power industry have made strides in line with goals set by the Paris Agreement, aviation’s extended development timelines, safety prerogatives and high-caliber technology challenges mean change comes slow.

Commercial aviation’s share of CO2 emissions from fossil fuels — predominantly from passenger airlines — jumped 29% to 918 million metric tons between 2013 and 2019, according to the International Council on Clean Transportation in Washington.

With hydrogen-powered commercial airliners still a decade or more away, there’s little for carriers to do but use carbon offsets and promote SAF. While London-based IAG was one of the first airline groups to pledge to achieve net zero emissions by 2050, the International Air Transport Association is only this year planning to ask other carriers to adopt the target.

There is pressure on the industry to go further -- supporting new taxes, mandates on SAF, and a switch to alternatives such as train travel, until new solutions can be brought online. Airlines should be demanding policies that will restrict the growth in demand, such as a U.K. tax on jet fuel, said Transport & Environment’s Finch.

“If U.K. aviation were serious about decarbonizing, it would openly ask for policies that restrict the growth in demand,” he said.