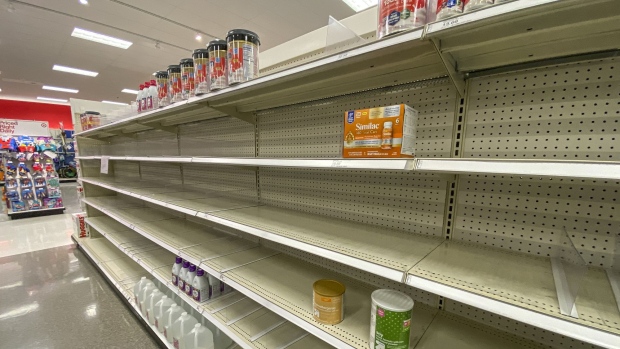 Empty shelves in the baby formula aisle of a store in Albany, California, US, on Tuesday, May 17, 2022. President Joe Biden said he expects increased imports of baby formula to relieve a US shortage “in a matter of weeks or less,” as pressure mounts from parents and lawmakers to address the problem. , Bloomberg

(Bloomberg) -- Formula isn’t just for babies. April Crohare desperately needs it for her 14-year-old son, Charlie. Due to medical complications from a rare brain disorder called lissencephaly, his only source of nutrition comes from infant formula through a feeding tube.

The Crohares, who live in Maryland, had relied on Abbott Laboratories’ hypoallergenic brand EleCare to feed Charlie for almost half his life until the specialty formula was pulled off shelves in a February recall linked to bacterial contamination at Abbott’s Sturgis, Michigan, facility. She’s been frantically searching for it -- or another product her son can digest without getting sick -- ever since.

“This was the first time I’ve thought my kid was going to die because we can’t get formula, not because of all of his other medical issues,” Crohare said.

Decades of market consolidation in the US have resulted in problems like the one the Crohares and millions of other American families are now facing. Four companies -- Abbott, Perrigo, Nestle SA and Mead Johnson -- control 90% of the US supply of formula.

The risks of that concentration only came into sharp relief recently, when the Food and Drug Administration recalled some of Abbott’s brands. That move came after four babies who consumed formula made at its plant were infected with cronobacter -- two of them died. Abbott said there’s no conclusive evidence linking its products to the infections and that analysis showed the strains taken from two infants’ samples didn’t match those found at its plant. The FDA did its own investigation into the cases, which it said it has since concluded, but the agency hasn’t provided any information to the public about what it found.

Some people like the Crohares have been scrambling for formula since the recall first started, because they rely on a specialty brand for which there aren’t many alternatives. Other families with less-specific formula needs have seen the problem become worse over time. The recall led to panic buying and hoarding, creating shortages that have spread throughout the country. More than 21% of store shelves that carry formula are bare as of May 15, according to IRI, a market analytics company. San Angelo, Texas, and Topeka, Kansas, are among the hardest-hit areas, with more than 30% out of stock as of May 8.

The Role of WIC in the Formula Shortage

The story of how those shelves ended up empty dates back years: The Covid-19 pandemic disrupted the supply chain for formula like it did for so many other household essentials. It also dates back decades, to the 1972 creation of a federal program to feed infants -- the Special Supplemental Nutrition Program for Women, Infants, and Children, more commonly known as WIC.

The USDA estimates that WIC accounts for more than half of the country’s formula market. Some 45% of all American babies were eligible for WIC as of 2018, the most recent year data was available, and nearly all of those who are eligible use the program.

That makes WIC a crucial factor in the formula market, and the way it is structured has led to formula monopolies in the majority of US states. In 1989, Congress mandated that all states adopt competitive bidding for their WIC program. Under that law, states are required to award a formula contract to the lowest bidder, in most cases leaving one company in control of an entire state’s WIC formula allocation.

Read more: What you need to know about the US baby formula shortage

Abbott has become a major player through this system, with the company now providing the formula for nearly half of the babies covered by WIC nationwide.

These monopolies created by WIC have made it hard for other brands to break into the market, David Davis, a professor of economics at South Dakota State University, said. “If you want to be even a minor player in the industry, you need the WIC contracts,” he said.

WIC contracts play a big role in how a formula maker does in a given state with other consumers as well. When a manufacturer clinches a state WIC contract, it boosts sales of its product to non-WIC consumers, according to a study from the US Department of Agriculture’s Economic Research Service, which analyzed the program’s effect on the infant formula market. The opposite is also true: When a manufacturer loses a WIC contract, its market share in the non-WIC segment drops dramatically. For example, in August 2007, California switched its WIC contract from Abbott to Mead Johnson, and Abbott’s market share in the state, with both WIC and non-WIC consumers, dropped to 5% from 90%, according to the USDA study.

Davis has tracked state-level bidding for WIC contracts for years and said sometimes several states will form alliances, so whichever manufacturer wins one contract, wins them all.

This kind of market concentration leaves little flexibility when something goes wrong. The current shortages are a frustrating illustration of that: Across the country, baby formula supply started dropping in early March, less than a month after Abbott recalled products from its Sturgis, Michigan, facility, according to data from IRI.

Federal Trade Commission Chair Lina Khan told a House panel Wednesday that the agency would “look at the mergers that contributed” to the current “fragile state” of the market.

“One plant has a really big impact on the industry,” Davis said. “This whole situation calls for a reexamination of how the formula market works.”

It hasn’t helped that trade and regulatory restrictions make imports of infant formula rare. FDA labeling rules prevent imports of formula made in Europe, since most lack the required US nutrition information. Infant formula that can be imported is also subject to an added tax of 17.5%. The United States‐Mexico‐Canada Agreement adopted by the Trump administration in 2020 also restricts infant formula imports from Canada, part of an effort to protect US dairy farmers from being undercut by Canadian rivals.

All of this has meant very few brands have much of a footprint in the US formula market. Marc Scheineson, an attorney at Alston & Bird who has represented formula startups, said that when a smaller player wins FDA authorization for a new formula product, it’s often immediately taken over by one of the bigger companies.

“The antitrust laws are supposed to prevent that from happening, but they haven’t been zealously enforced in years,” Scheineson said. This type of unchecked market dominance, along with WIC contracts and heavy FDA regulations, have created an industry where “entry barriers are too high” and “competition is too great” for new formula makers to stand a chance.

That hasn’t stopped a startup called ByHeart from trying. Just a few weeks ago, it said it got FDA approval for its new plant in Pennsylvania, making it the first new formula manufacturing entrant in the US in the past 15 years. The company’s new formula launched on March 23, in the midst of Abbott’s recall.

ByHeart’s co-founders Mia Funt and Ron Belldegrun said they realize the company has launched during a “very complex time,” but that has only emboldened their mission. Just last week they took in three months’ worth of new customers, and they’ve invested millions into scaling the company to ensure they’re able to keep up with growing demand.

Belldegrun said other companies that have tried to enter the baby formula market in recent years “haven’t brought anything to the industry.” Years of commitment to innovation and owning their supply chain have positioned ByHeart to “be part of the solution,” he said.