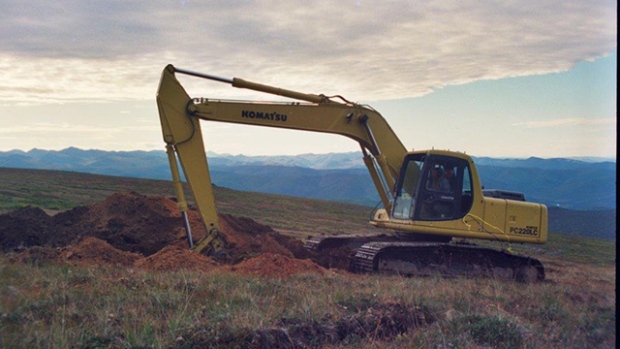 Trenching at Canadian Creek. , Image courtesy of Market One Media

Bill Morton and Glen Garratt describe themselves as a couple of "backyard boys" who have taken a patient approach to tapping the mineral resources of central British Columbia. And when your backyard is the fabled Cariboo, there's plenty to tap close to home. But who could resist the legendary lure of Klondike gold, especially with the price of the precious metal nudging the $1,300 an ounce mark? Certainly not Morton and Garratt.

Now their "one step at a time" strategy has landed the backyard boys a front row seat along with some big-time players in one of the hottest properties in Yukon — Canadian Creek, in the heart of the Klondike's gold fields.

"We're on the edge of something pretty significant," said Garratt. "The thing to do now is go out there and give it everything you got, which is what we're doing."

Garratt and Morton have spent over 20 years building Cariboo Rose Resources Ltd. (TSX.V: CRB) from the ground up. Since 1993, the public resource company has patiently assembled a portfolio of properties in B.C. and Yukon. They operate several significant gold and copper exploration projects with active development programs.

The project that has them the most excited right now is their strategic Canadian Creek property, which is surrounded by major players moving ahead in what has become the next wave of the Klondike Gold Rush. Located 160 kilometres south of Dawson City, the property consists of 311 claims covering about 6,000 hectares. More importantly, it's sandwiched between two sites owned by big players who are actively developing the area's gold potential. Canadian Creek is 25 kilometres southeast of Kaminak Gold Corporation's (Goldcorp Inc.), Coffee Gold deposit and about 50 kilometres southeast of Kinross Gold Corporation's White Gold project. It is contiguous on a 12 kilometre east west boundary with the Goldcorp owned  Coffee Project claims and contiguous on a 6 kilometre north south boundary with the Western Copper and Gold owned Casino claims.

"With Goldcorp kicking off Kaminak, you're really seeing, for the first time, an established major company with a long-term plan for the area," said Garratt, vice president of Cariboo Rose Resources Ltd. "That kind of puts us on a new shelf."

It's a pretty high shelf that was set up in July when Goldcorp acquired Kaminak Gold's multimillion-ounce Coffee Gold project. That puts a senior gold producer in play in the area. Cariboo Rose Resources' Canadian Creek property shares a 12-kilometre boundary with the Coffee project and a lot of common geology.

Another big boy playing in Cariboo Rose Resources' northern neighborhood is Kinross Gold Corporation, which is developing their promising White Gold property just 50 kilometres northwest of Canadian Creek. Add to that the Western Copper and Gold Corporation-owned Casino project that shares an eastern border with Canadian Creek, and you might say Cariboo Rose Resources finds itself between a rock and a hard place — which turns out to be a pretty sweet spot.

And people are starting to notice.

"We're getting cold calls for proposals and we haven't even initiated them, so this is really optimistic of the fact that we're into a new cycle and that the money behind it is substantive," said Morton, president and CEO of Cariboo Rose Resources. "We're in a good position to give our shareholders a substantial return on their investment."

Cariboo Rose Resources got into that position by taking a patient, systematic approach to mapping out the geology of the Canadian Creek property and other properties over a 20-year-plus period. The first claims at Canadian Creek were acquired by predecessor companies to Cariboo Rose Resources managed by Morton and Garratt in 1993. Since then, they've set the table by mapping out the properties geological footprint by drilling, trenching and careful analysis of the surface soil geochemistry.

All the "bits and pieces" have added up to an investment of approximately $4.5 million dollars that appears to be poised to pay big dividends.

"We've now got a terrifically strong database," said Garratt. "We have lots of detailed information to work with and if you look at the area of our targets, there's no reason why we can't find our own Kaminak, our own Coffee deposit — so the upside is big."

With Goldcorp and Kinross Gold both moving ahead, Cariboo Rose Resources will be in the field this coming season with an aggressive drilling program using helicopter-borne light drill rigs to further zero in on deposits.

"Next year we'll be running much larger programs and we'll be going in there with a lot more investment," said Morton.

"Goldcorp is going to be a pretty substantial neighbor, who are going to be way ahead on the development side, so you can see that this district play has a lot of room to grow along with that strong base," adds Garratt.

"It's a district that is now anchored with a major company who has pretty serious financial clout, so you've got to look forward and say in our area, there's going to be a lot of coordinated efforts here."

Canadian Creek has seen a lot of activity since the days of the original Klondike Gold Rush. Both it and Britannia Creek (which it runs into) had placer mines on them historically, and into recent times. But for all that placer activity, no one has yet to strike the mother lode.

"You can just say that we obviously think that we're finding the source or at least part of the source of those historical placer mines, and that's a great deal," said Garratt.

Not that Morton and Garratt are ignoring their own backyard. They're also pretty excited about a project in the Cariboo that is the mirror-image of Canadian Creek. Their Carbonate Hosted Gold property near Clinton in South Central B.C. has all the geology and the geochemistry indicating an enormous potential for significant gold deposits. But unlike Canadian Creek, there's never been a gold mine in the area.

"There's no historical mines or occurrences known in the area, but the geology and the geochemistry in the area indicate that the potential there is really tremendous for finding gold," said Garratt. "We want to advance that and see if we can't make a brand new discovery."

Using that partnership strategy, the company continues to present other projects in their portfolio to other senior and junior companies, particularly the Caruthers Pass copper-zinc-silver-lead project. Carruthers Pass is located in central B.C., about 70 kilometres south of the Kemess gold-copper mine and 200 kilometres north of Smithers. The property was optioned from Phelps Dodge Corporation of Canada, and is now 100-per-cent owned by Cariboo Rose. Carruthers Pass is a volcanogenic massive sulphide target discovered by Phelps Dodge in 1997 and explored by them between 1997 and 2000. The property consists of 130 mineral claim units covering 3,250 hectares.

Morton and Garratt bring decades of experience to their management of their companies. Both started out as university students who got summer jobs in the field and never looked back.

"I got a summer job and I fell in love with it," stated Garratt, who graduated from the University of British Columbia. "The next thing I knew I was on a great treasure hunt — for the next 45 years."

Morton's first field experience was in Northern Saskatchewan. He was inspired by a relative who worked as a career geologist for the Geological Survey of Canada: "That's where I ended up, a geologist, and I've been one ever since," he said.

That hands-on experience allows Morton and Garratt to manage a promising portfolio that's poised to make major progress in the near future. And it makes them feel good to offer investors a chance to take part in that never-ending story of the romance of the quest for gold.

"That romance is what has driven the junior mineral exploration business for an awfully long time," said Garratt. "It's a Canadian thing. Everybody feels they're part of being a pioneer."