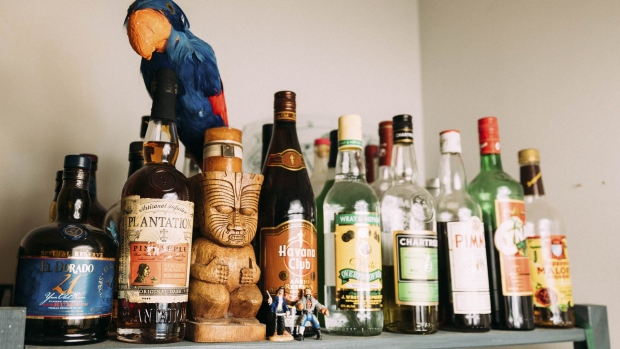 (Bloomberg) -- Americans consume around 46 million turkeys in late November, as well as 80 million pounds of cranberries and 50 million pumpkin pies. (In 2016, Costco Wholesale Corp. sold 1.75 million of those pies in the three days prior to Thanksgiving.)

Serving all that food to family and friends requires expert management skills. It’s hard to find topics everyone agrees on at Thanksgiving. One of the few is to plan ahead. (It was the late Tony Bourdain’s paramount rule.) But the holidays wreak havoc on the best-laid plans, and professional chefs know that. Below, many of them share tips for how to salvage disasters and serve a delicious meal when there’s no time left.

Why: “Don’t waste your time and make appetizers. People get too stuffed by the time they get to the table. A cheese and charcuterie board is always the way to go. Buy presliced meats to make your life easier. Add leftover olives, jams, or pickles to the platter, which helps clean out your fridge—you’ll need it for turkey leftovers.”

Why: “Never have an open bar at Thanksgiving. Choose the wine and cocktails beforehand. As guests arrive, get a drink into their hands the moment they walk in the door. Open bars [with too much variety] become disorganized for the host and the guests—not to mention that it gives people more opportunity to mix drinks and overindulge.”

Break Out the Cooler for Prep

Why: “Use a large cooler when brining your bird, instead of taking up valuable refrigerator space. Hold back half of the liquid brine and replace with ice. Place the bird directly in the ice solution overnight.”

Or Create an Instant Brined Turkey

Why: “Every year we brine our turkeys in baking soda and water—no salt or sugar—to tenderize the meat. Use 4 tablespoons of baking soda per gallon of water for around two hours. Then let it dry thoroughly and pat it down so there is no moisture.”

Give Turkey a Bacon Boost

Why: “Top the turkey breast with bacon to help keep the white meat from drying out and add more flavor. You can either overlap the bacon across the breast or create a lattice basket weave. Uncover the turkey for the last 10 to 12 minutes and increase the temperature to 400F to crisp up the bacon and brown the skin.”

And When in Doubt, Shove in a Beer

Why: “Obviously this idea stems from beer-can chicken. I make it on a larger scale to keep the turkey nice and moist. I use a 24-ounce can of Old Milwaukee and dry rub my bird with a mix of cayenne, smoked paprika, onion powder, garlic powder, salt, mustard powder, cumin, granulated white sugar, and brown sugar. I put in a bouquet of thyme, rosemary, and sage inside the bird for another burst of flavor and roast it the same way as beer-can chicken, vertically.”

Go Big With a Roasting Pan

Who says: Steven Redzikowski, executive chef-partner at OAK at Fourteenth, Boulder, Colo.Why: “Roast your turkey in the tallest-sided roasting pan you have, like a Swiss braiser. This shaves off significant cooking time because the walls of the pan help create a vortex of heat that cooks the bird much faster and helps crisp the skin.”

Who says: Eddie Huang, co-owner of Baohaus in New York, author of Fresh Off the Boat and director of the coming film Boogie

Why: “I combine stock and my seasoning in a spray bottle and spray the turkey constantly to hydrate the skin and keep it from burning as it cooks. Also, every culture has their own way of seasoning poultry. My special poultry mix is just what me and my mom created. I never saw anyone else do it this way, and we stuck to it. It’s red pepper, Sichuan peppercorn, salt, and white pepper, and we grind it up. We don’t have a special name for it, it’s just what we do at home.”

Why: “Make cranberry sauce with orange juice and dried cranberries mixed with fresh ones for a lower sugar content.”

Why: “Frozen peas. Really. Cure them in sugar and salt for an hour, and they’re even better. I toss them in a mixture that’s two parts salt and one part sugar to the point where they are a little overseasoned. Then I wait an hour or so, rinse them in water, and they are ready for preparation, hot or cold.”

Why: “If your turkey comes out too dry, soak it in chicken stock or broth. Slice it up and add it to a shallow pan of hot broth so the turkey bathes and steams. This keeps the meat juicy, warm, and moist.”

Juice Up Your Gravy

Why: “A secret weapon to improve gravy is to whisk in crème fraîche or sour cream, which adds creaminess without making the gravy too rich. Another trick to add depth: Add ¼ teaspoon of MSG.”

Dare to Use an Electric Knife

Why: “This Thanksgiving, invest in an electric knife. It’s the best way to carve a turkey. Besides being faster and fun to use, the electric knife ensures you always have a sharp blade instead of using that old dull chef’s knife. Don’t have too many glasses of wine first—you need a steady hand when carving. Try practicing on a loaf of bread that you may use for stuffing before the big day.”

Why: “Add miso to whatever recipe uses pumpkin. If the custard recipe calls for salt, omit the salt and double the weight in miso. Kids will still love it, but the neighbors next door will have something to be jealous of.”

Who says: Hereford, of Turkey & the Wolf and Molly’s Rise & Shine

Why: “Turn your leftover gravy into gravy mayo for a sandwich. Just like every other reasonable human, I look forward to the turkey sandwich the day after Thanksgiving pretty much all year. The move pretty simply is to mix some mayo into your gravy—about 2-to-1 gravy-to-mayo ratio. I whisk in a little miso paste to make it extra savory and finish it with lemon and whatever herbs are left over from cooking the day before.”

Bonus hack: “Mix your cranberry sauce with mayo and a little creole mustard and every herb you have, especially dill, and it’s the dopest sandwich sauce ever.”