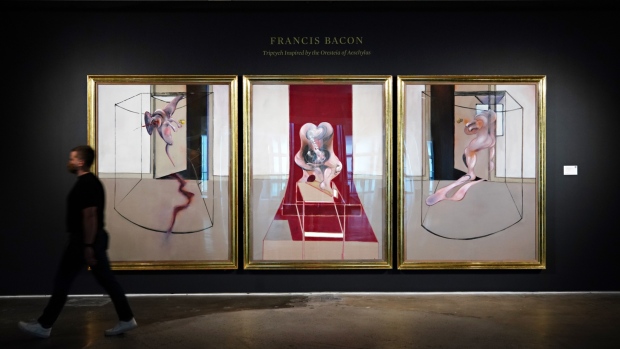 Francis Bacon’s “Triptych Inspired by the Oresteia of Aeschylus” fetched US$84.6 million at Sotheby’s, giving the high-end art market a boost after a months-long slump caused by the pandemic.

Estimated at US$60 million to US$80 million, the 1981 trio of paintings was the top offering at the marquee sales of contemporary, Impressionist and modern art sales. Sotheby’s guaranteed the work, consigned by the foundation of Norwegian businessman Hans Rasmus Astrup, who has displayed it at his private museum in Oslo since 1993. Proceeds from Monday’s sale will help expand and diversify the museum collection, Sotheby’s said.

The global art market has been in a rut since March. The three consecutive evening sales generated US$363.2 million, topping Sotheby’s low estimate of US$326 million for the entire series. The auctions are crucial in setting a new bar for investment-grade works, dealers said. Sotheby’s, Christie’s and Phillips typically hold their marquee semi-annual sales in May and November, but the May 2020 events were postponed.

The art market passed its first test “with flying colors,” said Oliver Barker, the event’s auctioneer. He was in London, taking bids on screen from colleagues around the world as clients participated on the web or by phone. Until now, the most expensive work sold online at Sotheby’s was Ivan Aivazovsky’s seascape, at 2.3 million pounds (US$2.8 million) on June 2. The priciest item purchased by an online bidder was a US$6 million pair of diamond earrings in 2016.

An online bidder from China competed for the Bacon work up to US$73.1 million. It sold to the client of Gregoire Billault, Sotheby’s head of contemporary art in New York. The auction record for a Bacon was set in 2013, when his triptych of Lucian Freud fetched US$142.4 million at Christie’s.

“Untitled (Head),” a 1982 drawing of a skull by Jean-Michel Basquiat, fetched US$15.2 million, a record for the artist’s work on paper, surpassing the high estimate of US$12 million.

The series will conclude Tuesday with the day auction of contemporary art.