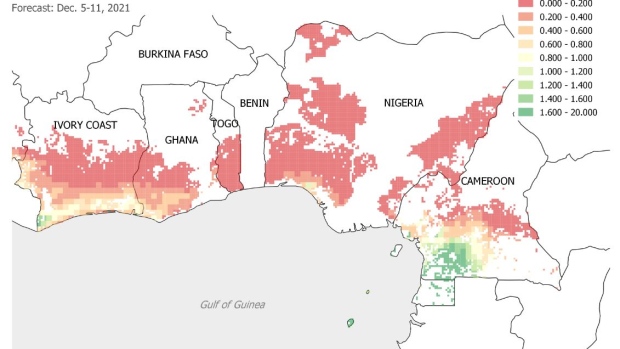 While weather conditions have been good for crops, heavy rain has flooded roads, making it harder for farmers to get their beans to cities or ports. The problem means that some growers in Guizreu in the nation’s west have preferred to go and sell in Guinea rather than heading to the Ivorian town of Danane, said Gbagbeu Gui, a farmer in the region.

Cocoa arrivals at Ivorian ports are down about 10% so far this season, the latest data show. That may be partly due to the poor road conditions. Also, the government cut farmers’ pay for the main crop by 18% from a year earlier.

“We are unable to dispose of part of our harvest,” said Moussa Sawadogo, a farmer in Pelezi in western Ivory Coast, adding that showers eased in the past week. “The roads have deteriorated considerably.”

Conditions across much of West Africa have been largely beneficial for crop development, with scattered rains interspersed with sunshine. London cocoa futures have eased about 10% since reaching a seven-month high in early October, partly on expectations for ample supply.

Still, a Ghanaian farmer near the Ivorian border said pods aren’t developing as expected, despite good weather. Delayed showers have also hurt crops in parts of Nigeria, with a farmer in Ikom saying that the main-crop harvest has yielded about half of last year’s volume. In Cameroon, some growers have sold beans into neighboring Nigeria due to better prices there, and some have returned to plantations after attacks by Anglophone separatists eased.