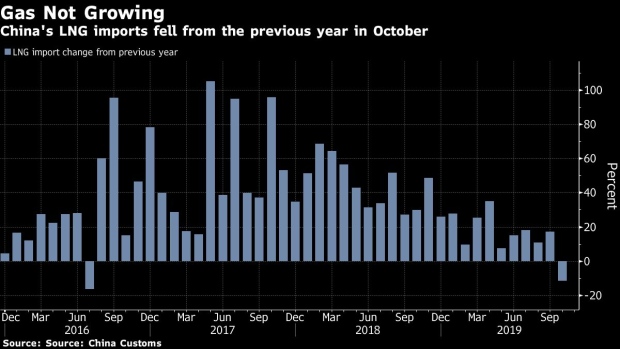 Sections of pipe sit stacked on the European Gas Pipeline Link (EUGAL) site, a joint construction project by Sicim SpA and Bohlen & Doyen GmbH, in Gellmersdorf, Germany, on Tuesday, May 28, 2019. One of Europe's biggest natural gas users has turned decidedly pessimistic on the fuel, prompting traders to rethink their own outlook for the industry. Photographer: Krisztian Bocsi/Bloomberg , Bloomberg

(Bloomberg) -- A slowdown in gas demand growth in China, the driver of global use over the past two years, is expected to slacken further, adding to investor concern as supply continues to build.

Consumption in 2021-2025 will grow at a slower pace than it has in the current five-year period, a researcher at China’s economic planning department said at the BloombergNEF summit in Shanghai on Wednesday. Furthermore, a weaker economy and rising imports via pipeline could shrink the share of liquefied natural gas in the overall Chinese market, according to gas utility ENN Energy Holdings Ltd.

The country’s overall gas use has expanded 9.5% so far this year, down from 18% in 2018, amid concerns that the slowing economy has prompted the government to focus less on pollution control, which had earlier helped spur demand for the fuel.

That contrasts with the boom in 2017-2018, when President Xi Jinping’s calls for blue skies sparked a race among local governments and businesses to switch millions of homes and factories from burning coal to using more of cleaner-burning gas.

The demand slowdown has pushed LNG prices in Asia lower by almost 40% this year, a slump also aided by China’s rising domestic output of the fuel.

China’s gas demand growth will likely slow over the duration of the 14th Five-Year Plan from 2021 to 2025 compared with current levels, Tian Lei, an assistant professor at the National Development & Reform Commission’s Energy Research Institute, said in an interview on the sidelines of the BNEF summit.

Consumption will probably be weaker at the start of the five-year period, before accelerating toward the end due to environmental pressure, he added.

A sharp deceleration in China’s economic growth -- with gross domestic product expanding in the third quarter at the slowest rate in decades -- coupled with rising pipeline imports following the start-up of the Power of Siberia line from Russia, could cut LNG’s market share in China and lower import growth, according to Mark Lay, deputy general manager of ENN.

China’s LNG imports gained 14% this year through October after rising more than 40% in each of the prior two years. Increased domestic gas production amid the nation’s efforts to bolster energy security will also erode overseas purchases, said Daniela Li, a BloombergNEF analyst.

To contact Bloomberg News staff for this story: Feifei Shen in Beijing at fshen11@bloomberg.net;Dan Murtaugh in Singapore at dmurtaugh@bloomberg.net