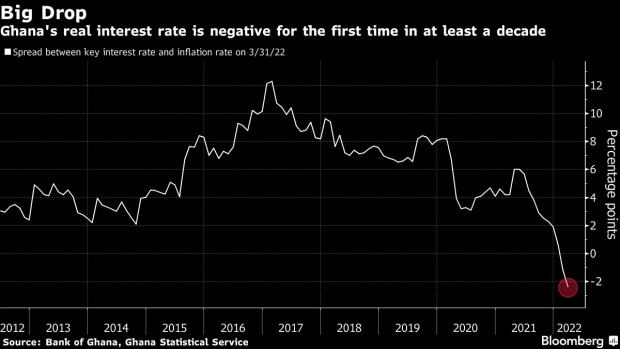 Ernest Addison, governor of the Bank of Ghana, poses for a photograph in London, U.K., on Wednesday, March 20, 2019. Ghana, which this week raised $3 billion through debt sales and was contemplating 100-year bonds, will work with the market to determine the tenure of its next issuance, Finance Minister Ken Ofori-Atta said. Photographer: Simon Dawson/Bloomberg , Bloomberg

(Bloomberg) -- Surging prices are posing a challenge to Ghanaian policy makers who prefer to have a key lending rate above headline inflation.

The Bank of Ghana already increased the benchmark rate to a three-year high of 17% at its last meeting, pushing the gauge above headline inflation at the time. The most recent data put inflation at 23.6%, leaving policy makers in a tight spot as they prepare to announce their latest stance on May 23.

“It’s an issue, which in a sense is baffling for all of us,” Governor Ernest Addison said in a virtual interview Monday before the Bloomberg Invest: Focus on Africa conference. “I do not want to preempt what the committee will decide, but I think it’s a very complicated situation.”

Annual inflation in April accelerated to the fastest pace since January 2004, up from 19.4% in March, according to the Ghana Statistical Service, and has been above the central bank’s preferred range of 6% to 10% for eight consecutive months. Surging food and fuel prices are adding to inflation pressures across the continent. In Ghana, the headline figure hit an 18-year-high despite measures aimed at taming prices.

The government has cut expenditure, while the central bank raised rates by 250 basis points in March -- the biggest hike since at least 2002 -- and increased banks’ primary reserve ratio to draw liquidity from the economy, Addison said.

“A lot of the shocks that we are seeing now tend to be supply-side in nature,” he said. “We expect that inflation will be tapering off for the rest of the year.”

Ghana’s economy grew 5.4% last year, a strong comeback from a 37-year low of 0.5% in 2020, when the Covid-19 pandemic struck. But this year growth could be hobbled by Finance Minister Ken Ofori-Atta’s proposed 30% cut to government spending.

“I believe that if we were to choose between growth and inflation, the policy priority should be on managing the pace at which prices are rising,” said Addison. Early 2022 data doesn’t suggest growth is slowing down, he said.

The government has sought to stem a sell-off in Ghana’s dollar bonds to assure wary investors it will meet fiscal targets, rein in debt and regain market access it lost this year. Portfolio investors also exited cedi bonds, contributing to the currency’s 19% loss against the dollar this year and fueling inflation.

“We are trying to manage liquidity very tightly to ensure that we don’t have excess liquidity fueling further inflation and an exchange-rate depreciation,” Addison said. “If markets get tighter and we see capital beginning to exit, the interest-rate instrument will have to do part of the work.”