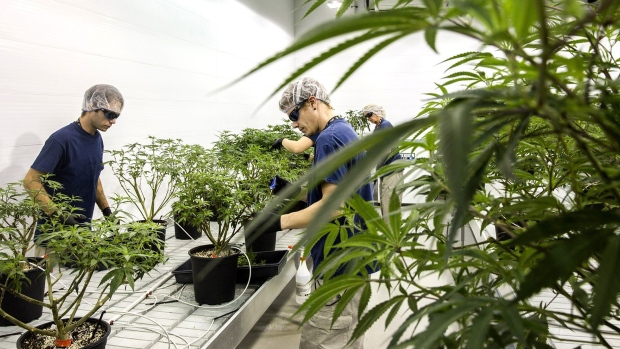 Senator Jeff Merkley once shadowed a cannabis grower and dispenser as he tried to pay his state taxes. He stuffed a backpack with US$70,000 in US$20 bills and drove 50 miles -- unguarded -- with the bulging bag in the back seat. Once he arrived at the Oregon Department of Revenue, he went through multiple rounds of security to deposit his satchel in a room packed with guards looking after the millions of dollars pouring in from other cannabis companies.

Merkley, a Democrat from Oregon, likes to recount the story to show the lunacy of the federal government’s treatment of the cannabis industry. Legal sales exceeded US$10 billion in 2018, the annual Marijuana Business Factbook reported, and are expected to hit US$80 billion by 2030, according to research firm Cowen Inc. Yet the substance remains illegal on a national level, so banks must forego a lucrative revenue stream -- or risk prosecution or the loss of their charter.

The door to a solution may finally be opening. On Aug. 5, Rodney Hood, the chairman of the National Credit Union Administration, said his agency won’t punish federally chartered credit unions for working with cannabis companies in states where marijuana is legal. Credit unions still must follow anti-money-laundering and other banking laws. Some state-regulatedcredit unions have already been providing banking services to pot companies, but often charge higher prices because of the extra paperwork and risks involved.

Credit unions, though, are only a partial answer. A new regulator could easily reverse Hood’s policy. “The crux of it is that it’s still illegal,” said Joanne Sherwood, the chief executive officer of Colorado’s Citywide Banks and chair of the Colorado Bankers Association. “We need to make cannabis legal or we need” a federal law to clarify the rules for banks, she said.

A growing number of U.S. lawmakers from both parties is trying to do just that. A House measure that would protect financial institutions that serve cannabis businesses now has 206 cosponsors and is teed up for a floor vote in the fall.

Most of the Democrats seeking the 2020 presidential nomination would also make marijuana legal nationally. Former Vice President Joe Biden is a notable exception, yet even he would decriminalize the drug so that the national ban would remain but sanctions would be lighter.

But perhaps the biggest breakthrough came on July 23 at a Senate Banking Committee hearing. Its Republican chairman, Idaho Senator Mike Crapo, for years refused to even discuss letting banks serve the cannabis industry. So it was a surprise when he agreed to use his committee as a platform to consider ways around the cash conundrum.

That’s when Merkley told his story and explained how legislation he is proposing, the Secure and Fair Enforcement Banking Act, would help. His measure would provide a safe harbor for banks by barring federal law enforcement and regulatory agencies from punishing banks for working directly or indirectly with cannabis-derived cash.

Merkley’s tale dates back to 2016. Since then, the federal-state conflict has only gotten worse: Marijuana is now legal for recreational use in 11 states and allowed for medicinal use in another 22. More than half of Americans live in those 33 states.

Idaho isn’t among them. It hasn’t legalized pot for recreational or medicinal use. And Crapo for years has publicly resisted green lighting financial industry involvement. Just in April he said it would be “difficult” as long as cannabis is illegal under federal law.

Behind the scenes, though, the pressure for him to reconsider has been mounting. Earlier this year, the Idaho Bankers Association began talking to the senator about the issue for the first time. When Trent Wright, the group’s chief executive officer, asked Crapo to hold a hearing, he was surprised when the answer was yes.

Meanwhile, a consensus has been building among other senators, Wright said. Colorado Republican Cory Gardner, whose state pioneered liberalization of marijuana laws and who is co-sponsoring the SAFE Banking legislation, might have been especially persuasive. “I have spoken many times with Senator Gardner on this bill,” Crapo said at the hearing.

National associations have also been weighing in, according to James Ballentine, the executive vice president of congressional relations at the American Bankers Association. Lately, Ballentine has sensed a change in the air. “When Crapo started looking at this issue five to six years ago, there weren’t 33 states that had legalized marijuana in some form,” he said. “I’m sure he’s now been hearing quite a bit on this issue, and I think the groundswell of input” convinced him to take a deeper look.

An April letter to Crapo from Don Childears, president of the Colorado Bankers Association, explained how cash generated by out-of-state marijuana businesses can end up in Crapo’s state.

For example, a bank in Idaho might open an account for a commercial property owner whose tenants operate a marijuana dispensary in nearby Washington. In that case, it’s the bank’s responsibility to close that account or face possible money-laundering charges or regulatory action. Similarly, an Idaho utility that sells power to a marijuana grower in Oregon could risk its own banking relationship by accepting cannabis cash.

“The reality is that marijuana businesses will go wherever they can to get services, even to states where marijuana is illegal,” he told Crapo in the letter. “Banks in every state are vulnerable.”

Childears said other Republican politicians have found their comfort level with cannabis banking after realizing how difficult it is to deal with large amounts of cash. John Boehner, the former House speaker, is an example. In 2011, he wrote to constituents that he was “unalterably opposed to the legalization of marijuana.”

But in 2018, less than three years after leaving office, he joined the board of cannabis investment firm, Acreage Holdings Inc. In April, Acreage agreed to sell itself to Canada’s Canopy Growth Corp. for US$3.4 billion, contingent on the U.S. legalizing weed at the federal level.

That’s where Boehner comes in: In February, he formed the National Cannabis Roundtable to lobby for marijuana reform. He now calls for removing the drug from Schedule I, the federal government’s list of the most dangerous substances. A lower classification would ease restrictions on research, allow the U.S. Department of Veterans Affairs to prescribe weed as an opioid alternative and allow financial companies to provide services to growers and dispensers.

“It’s just taking that cultural change in and realizing at the same time there are tremendous economic benefits,” said Terry Holt, a roundtable spokesman. The benefits for Boehner could also be huge: His 625,000 Acreage shares would likely jump in value if the Canopy deal closes.

Even U.S. Attorney General William Barr seems to be coming around. In April, he said he would address the conflict between federal and state laws by allowing states to opt out of the federal pot prohibition. Senators Elizabeth Warren of Massachusetts and Colorado’s Gardner back that route.

But Christopher Barry, a lawyer who advises cannabis companies on regulatory matters, said that that could be even harder to get through the Senate. An incremental approach -- one that just deals with the banking problem -- is more realistic, he said.

That’s why Crapo’s hearing mattered. A hearing isn’t the same as lending support, of course, but finance industry officials believe it has built momentum behind the SAFE Banking proposal, which could result in a breakthrough in the coming year. “We continue to believe this Congress will enact legislation by end of 2020 to give cannabis firms access to banking services,” Cowen analyst Jaret Seiberg wrote on Aug. 6.

Even Crapo seems to agree. “This is a very important and complex issue that we need to get right,” Crapo said. “At this point, we’ve got a lot of interest and information coming in to us. And we’re going to work to see if we can find the answers to these questions.”

--With assistance from Austin Weinstein