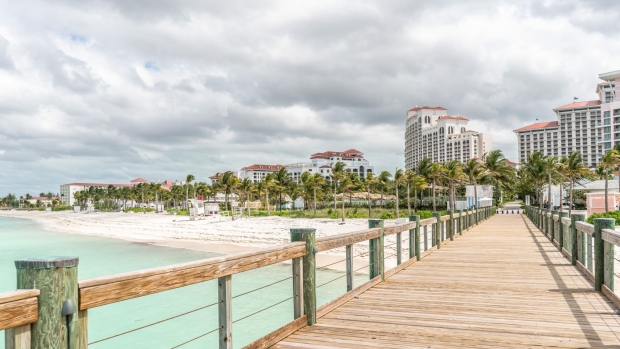 (Bloomberg) -- The Bahamas is set to beat some of the world’s superpowers in launching a sovereign digital currency.

After piloting the so-called Sand Dollar on the islands of Exuma and Abaco late last year, the central bank will roll out the e-currency nationwide in October. Officials say it will make digital payments easier, especially on the far-flung islands that play a critical role in the tourism-dependent economy.The monetary authority has just $48,000 worth of Sand Dollars on its balance sheet, valued at 1-to-1 with the regular Bahamian dollar, which is pegged to the greenback. But even at that diminutive scale, the project puts the country at the forefront of a global race to create state-backed digital currencies, a goal shared by behemoths like China as well as Caribbean neighbors including Jamaica and Barbados.

“A lot of residents in those more remote islands don’t have access to digital payment infrastructure or banking infrastructure,” said Chaozhen Chen, the assistant manager of eSolutions at the Central Bank of The Bahamas. “We really had to customize the effort and the solution to what we need as a sovereign nation.”

To be clear, central bank digital currencies are far removed from their better-known crypto counterparts, such as Bitcoin and Ethereum. Those tokens are valued for the relative anonymity they give holders and their lack of direct ties to conventional currencies. Sand Dollars, on the other hand, are simply an electronic offshoot of the Bahamas dollar.

Once the system is up and running, holders will be able to use their mobile phones to make person-to-person or business transactions -- even when they’re offline. For consumers already using mobile-payment systems, the experience might not be much different.

But for the payment service providers, or PSPs, facilitating those transactions, the Sand Dollar makes the settlement process much more straight forward.

“Trading is easy but settlement is hard,” said Keith Davies, the chief executive officer of Kanoo, one of the Bahamian PSPs piloting the Sand Dollar. Unlike conventional PSP transactions, once a Sand Dollar transfer happens “it’s final and irrevocable because it’s fiat currency,” he said. “It is the essence of a settlement system.”

The government is quick to dispel notions that it’s opening up a crypto wild west in the archipelago nation of about 400,000 people. New Sand Dollars will be “minted” as demand grows and will only be issued when physical Bahamian dollars are retired to keep from skewing monetary policy, Chen said. Also, Sand Dollar accounts are subject to the same rules as traditional bank accounts, with anti-money-laundering and know-your-client safeguards in place.

Other countries that have tried to encourage widespread use of sovereign e-currencies don’t have much to show for it. Initiatives in Ecuador, Finland and Venezuela failed, largely because they never caught on with consumers.

In the Bahamas, the rigid policies and government backing could set the stage for wide adoption, said Richard Douglas, the head of technology at Island Pay, a PSP also testing the Sand Dollar.“The Bahamas is laying the groundwork for how it could be done throughout the Caribbean,” he said.