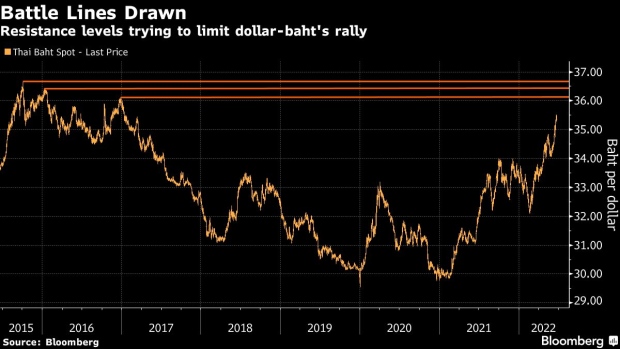 Customers at Ba Hao restaurant on Soi Nana alley in the Chinatown area of Bangkok, Thailand, on June 1, 2022. , Bloomberg

(Bloomberg) -- The slump that’s taken the baht to its weakest in more than five years may be near an end as Thailand entices back tourists and the central bank edges toward hiking rates.

The currency’s 6% drop versus the dollar this quarter -- its worst three-month performance since Covid-19 devastated sentiment in early 2020 -- has coincided with the country’s biggest current account deficit in nine years and still-record-low borrowing costs.

Yet both of those burdens are set to lighten, with the Bank of Thailand’s policy board turning more hawkish this month and the government loosening restrictions to boost revenue from foreign visitors.

“Once we get more dollar softness, an increase in tourism inflows or a Bank of Thailand hike, the baht should arrest declines and we could even see a good rally,” said Galvin Chia, an EM FX strategist at Natwest Markets in Singapore. “It’s a growth laggard with room for catch-up.”

With the scrapping of the nation’s entry pass, authorities expect about 1.5 million international tourists a month for the remainder of this year, compared with fewer than 300,000 in April. That’s likely to go a long way to shoring up the baht given that the travel-related sector accounted for about a fifth of the nation’s economy before the pandemic.

The Bank of Thailand’s reluctance to hike rates is also dissipating, with three of four board members calling for higher borrowing costs on June 8 and policy makers as a whole flagging mounting inflation risks.

Technical indicators also suggest the baht is due some respite. Slow stochastics momentum gauges show the currency is oversold versus the dollar. The greenback also faces a series of resistance levels to further gains against the baht. These are layered between 36.11 and 36.67 at highs set between October 2015 and December 2016.

Still, the central bank’s shift leaves the currency vulnerable to any increased hawkishness from the Federal Reserve.

And it’s not the only potential headwind. Thailand is a net oil importer and crude prices remain elevated despite coming off recent highs, keeping pressure on the current account balance.

Current account data for May is due on Thursday. Thailand recorded a deficit of $3.35 billion in April.