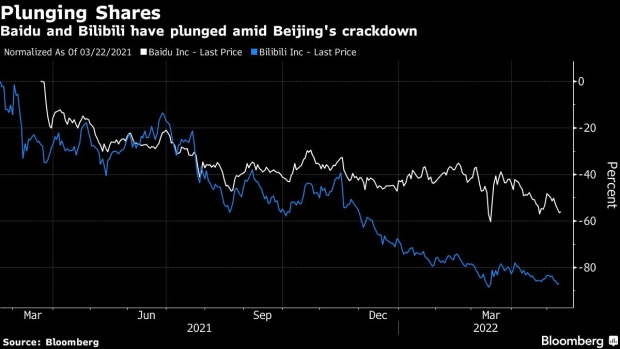 A screen shows a message marking the listing of Baidu Inc. on the Hong Kong Stocks Exchange in Hong Kong, China, on Tuesday, March 23, 2021. Baidu's stock offering in Hong Kong today marks an unlikely resurgence for founder Robin Li, who has fought his way back to relevance in China’s technology industry after squandering a near-monopoly in search. , Bloomberg

(Bloomberg) -- Baidu Inc. and other Chinese technology giants caught in a brutal selloff over the past year may see some respite from an expansion of Hong Kong’s equities benchmark that should drive buyers into their stocks.

The search-engine operator along with video streaming firm Bilibili Inc. are among top candidates expected to be added to the Hang Seng Index during the quarterly reshuffle next month, according to data compiled by Bloomberg. The results of the review, which will boost the number of stocks in the index, will be announced on May 20.

With about $17 billion of passive funds tracking the benchmark, stocks like Baidu and Bilibili could get a much-needed shot in the arm through inflows if they get included. They’ve plunged 59% and 85%, respectively, from their 2021 peaks in Hong Kong.

“The most likely technology inclusion in the Hang Seng Index is Baidu,” said Brian Freitas, an analyst at independent research website Smartkarma, adding that buying by index funds could stabilize the stock in the short term.

Beijing’s protracted crackdown of the tech sector and investor worry over economic setbacks due to the nation’s strict Covid Zero policy have hurt sentiment, with the Hang Seng Tech Index losing more than half a trillion dollars in value this year.

That has created a fierce debate across Wall Street over the attractiveness of Chinese assets, with fund manager BlackRock Inc. abandoning its bullish stance. JPMorgan Chase & Co. distributed research in March labeling Chinese internet stocks “uninvestable,” but people familiar with the matter said this week the reports were published in error.

Index inclusions, however, could ultimately fuel a rally. Baidu may attract $391 million of passive fund buying, according to China International Capital Corp. The amount will take at least four days to complete based on the average daily turnover over the past three months, the brokerage said.

For Bilibili, if it gets added, the value of buying orders would be 10 times more than its average daily trading.

Last year, compiler Hang Seng Indexes Co. said it would boost the number of members in the Hong Kong stock benchmark to 80 from 52 in a bid to embrace the new economy -- one that shifted focus to information technology and away from the financial and property sectors. The gauge now has 66 members, with the upcoming rebalancing taking effect on June 13.

It isn’t just Baidu and Bilibili that could get a lift in the impending review. Other potential inclusions may include short-video platform operator Kuaishou Technology and chip maker Semiconductor Manufacturing International Corp., according to CICC. Electric-vehicle makers Li Auto Inc. and XPeng Inc. and online travel agency Trip.com Group Ltd. are also possible candidates.

To be sure, analysts say that inclusion will not be the silver bullet when it comes to reviving heavily battered shares, given that concerns including regulatory crackdowns and a slowing economy play a large part in how the stocks trade.

The rout in technology stocks this year has meant no end to the volatile ride in shares of Apple Inc., which on Wednesday lost its title as the world’s largest company by market value. Since the start of April, the iPhone maker has seen eight sessions where it closed with a decline of at least 2%, compared with only three trading days that ended with a 2% gain. The stock is on course to open Thursday more than 20% below its January record.