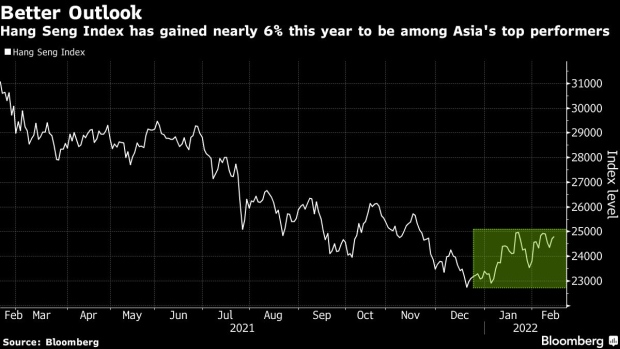 A screen shows a message marking the listing of Baidu Inc. on the Hong Kong Stocks Exchange in Hong Kong, China, on Tuesday, March 23, 2021. Baidu's stock offering in Hong Kong today marks an unlikely resurgence for founder Robin Li, who has fought his way back to relevance in China’s technology industry after squandering a near-monopoly in search. , Bloomberg

(Bloomberg) -- Chinese internet giant Baidu Inc. is among stocks that analysts say could be added to the Hang Seng Index in the ongoing reshaping of Hong Kong’s benchmark gauge.

Most of the candidates are expected to be so-called “new economy” plays as index compiler Hang Seng Indexes Co. looks to expand the number of components while reducing the proportion of financial and property shares.

Baidu, Nongfu Spring Co. and Genscript Biotech Corp. are potential additions in the latest review, according to Bloomberg Intelligence analyst Marvin Chen. The results are set to be announced Friday evening local time.

“The tech, health-care and consumer sectors may remain the focus of Hang Seng Index inclusions going forward, with all three industries expected to net-add four to six names,” Chen wrote in a note Wednesday.

The Hang Seng Index, which currently comprises 64 stocks, has gained nearly 6% this year and is among Asia’s top performing benchmarks. Investors in Hong Kong have snapped up local shares recently due to attractive valuations and a perceived easing of China’s regulatory crackdowns.

Hang Seng Indexes Co. in March 2021 announced the biggest-ever overhaul of its benchmark gauge, looking to boost the number of members to 80 by mid-2022. Other recent reviews saw the inclusion of new economy names including BYD Co., JD.com Inc. and NetEase Inc.