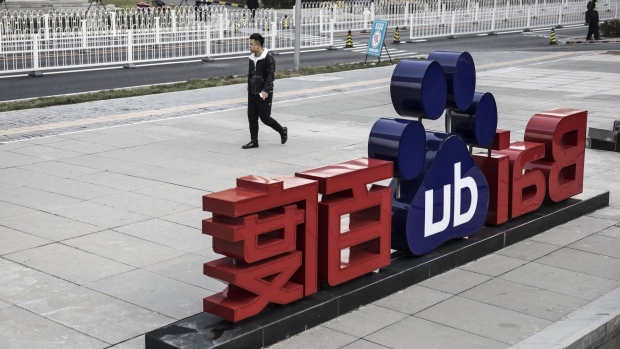 A man walks past a sign for Baidu Inc. at the entrance to the Baidu Technology Park in Beijing, China, on Friday, Nov. 25, 2016. Baidu serves 6 billion searches a day and dominates mobile mapping, which gives location data for its mobile users as well as those of apps built on its map data. , Bloomberg

Baidu Inc. posted a smaller-than-forecast drop in revenue after its online advertising business bounced back from the pandemic. The company said it will keep investing heavily in technology to boost growth, and the stock slipped in extended trading.

China’s leading search engine reported sales declined 1 per cent to 26.03 billion yuan (US$3.75 billion) in the June quarter, versus an average forecast for 25.7 billion yuan. Net income was 3.58 billion yuan, versus the 2 billion yuan projected, the company said Thursday in a statement.

Baidu is riding a gradual post-COVID 19 recovery in its home market but, at the same time, is trying to ward off increasingly aggressive competition in media and advertising from the likes of Tencent Holdings Ltd. and ByteDance Ltd. The company is diversifying ad revenue sources and investing in content for its Netflix-style iQiyi Inc. to keep users and marketers from migrating to hotter formats like ByteDance’s Douyin, TikTok’s local equivalent.

"Baidu’s 2Q online marketing sales could contract less than 1Q’s 19 per cent drop as the company emerges from the worst of China’s coronavirus outbreak. The second quarter has been seasonally strong for advertising in the past, and this time Baidu will benefit from the rebound in offline business activity and improved advertiser sentiment."
- Vey-Sern Ling and Tiffany Tam, analysts

Once the runaway leader in desktop search, Baidu is trying to adapt its business to the mobile era but losing ground piecemeal to rivals such as ByteDance. To compete, it plans to offer subsidies to influencers and direct more traffic to them across its family of apps, including in live-streaming. Longer term, the search giant is investing in artificial intelligence technology, and betting on the commercialization of that through smart speakers and self-driving cars.

Rising geopolitical tensions are another source of concern. Baidu’s apps were among dozens of Chinese services targeted in India’s sweeping ban last month, while U.S. entities will soon be blocked from dealing with TikTok and Tencent’s WeChat. The U.S. Congress is moving closer to passing legislation that could effectively bar Chinese companies from trading on U.S. exchanges. Billionaire Baidu founder Li told state media earlier this year that the company is considering relisting in regions including Hong Kong.

Baidu’s U.S. shares fell about 7 per cent in extended trading following the report. The stock also came under pressure after Iqiyi disclosed Thursday after U.S. markets closed that the U.S. Securities and Exchange Commission is seeking some financial and operating records going back to 2018 and documents related to certain acquisitions and investments. Iqiyi, which is backed by Baidu, said it’s cooperating with the investigation. The company’s U.S. shares dropped as much as 19 per cent.

Baidu also said its board approved an increase of its share-repurchase program to $3 billion from $1 billion, effective through 2022.