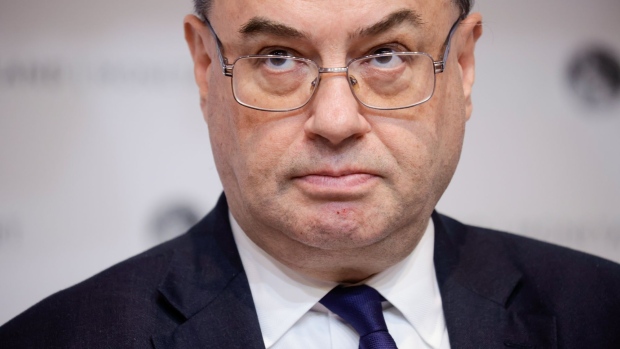 Andrew Bailey, governor of the Bank of England (BOE), during the Monetary Policy Report news conference at the bank's headquarters in the City of London, U.K., on Thursday, Feb. 3, 2022. The Bank of England lifted its key interest rate as part of a package of measures to contain inflation that’s on course to top 7%, as policy makers came within a whisker of delivering an unprecedented 50-basis point increase. Photographer: Jason Alden/Bloomberg , Bloomberg

(Bloomberg) -- The head of the Bank of England has warned again that curbing its independence could jeopardize its international reputation and signaled that draft rules over financial services shouldn’t be changed to give more power to politicians.

“Anything that would weaken the independence of regulators would undermine the aims of the reforms,” Andrew Bailey said in a July 27 letter to the chair of parliament’s influential Treasury Committee that was published Thursday. “Regulatory independence is important, not least because our international standing, and therefore the competitiveness of the UK financial sector which the reforms are aimed at enhancing, depends on it.”

His comments, which echo remarks he made at the annual Mansion House dinner last month, come amid a debate about whether the bill which will create a post-Brexit framework for financial services should be amended before it becomes law to add an extra “call in” power. That would enable the UK government to override the actions of the regulators.

Liz Truss, the Foreign Secretary currently in the lead to become the next prime minister, backs the move, according to her allies. Truss’s opponent, former Chancellor of the Exchequer Rishi Sunak, argues that such powers are needed to ensure politicians -- not “faceless regulators” -- are accountable for regulatory decisions.

The measures in the bill that was published in July are “intended to establish a strong, responsive and internationally respected approach to financial services regulation for the UK,” Bailey said in the letter.