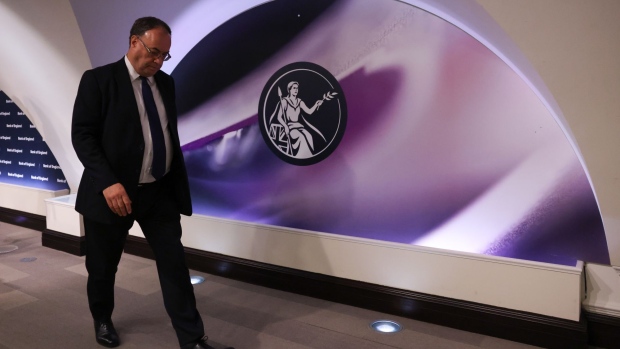 Andrew Bailey, governor of the Bank of England (BOE), leaves following the Monetary Policy Report news conference at the bank's headquarters in the City of London, UK, on Thursday, Aug. 4, 2022. The Bank of England unleashed its biggest interest-rate hike in 27 years as it warned the UK is heading for more than a year of recession under the weight of soaring inflation. Photographer: Hollie Adams/Bloomberg , Bloomberg

(Bloomberg) -- Bank of England Governor Andrew Bailey said he’s concerned inflation is building in the UK because companies are having trouble hiring the people they need and feel the need to raise their prices.

The comments in an interview on BBC Radio 4 on Friday help explain why the UK central bank lifted borrowing costs the most in 27 years yesterday.

Bailey said policy makers must act to prevent a wage-price spiral from fanning inflation, which is growing at its quickest pace in four decades and forecast to leap above 13% later this year.

“The real risk we’re responding to is that the inflation becomes embedded and it doesn’t come down in the way that we expect,” Bailey told the Today program. “We’ve had a shrinkage in the labor force. I talk to businesses a lot. The first thing they want to talk to me about is that businesses have trouble hiring people, and that is still going on. They’re also saying to us actually they’re not finding it difficult to raise prices at the moment. That can’t go on.”