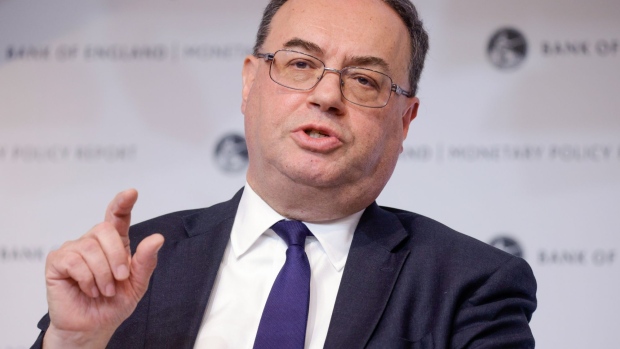 Andrew Bailey, governor of the Bank of England (BOE), during the Monetary Policy Report news conference at the bank's headquarters in the City of London, U.K., on Thursday, Feb. 3, 2022. The Bank of England lifted its key interest rate as part of a package of measures to contain inflation that’s on course to top 7%, as policy makers came within a whisker of delivering an unprecedented 50-basis point increase. , Bloomberg

The Bank of England softened its guidance on future interest-rate increases this month to reflect the high level of economic uncertainty, Governor Andrew Bailey said in his first public comments since the central bank’s March decision.

Speaking at an event in Brussels, Bailey said spiking energy prices in the wake of Russia’s invasion of Ukraine mean that inflation, currently above 6%, is likely to move further above the BOE’s 2% target. While it’s been appropriate for the BOE to tighten policy in these circumstances, guidance given by policy makers should reflect the current uncertainty, Bailey said.

The comments were in reference to the BOE’s March meeting, when officials said a further tightening of policy “might be” appropriate in the coming months, a softening from the wording in February, when they said such a move was “likely.” The BOE has hiked interest rates for the past three meetings, taking the key rate to 0.75%, and markets expect rates to hit 2% later this year.

Traders trimmed bets on the scale of future rate hikes after the comment on Monday, pricing around 135 basis points of tightening by year-end compared to roughly 145 basis points before he spoke.

Bailey also said the U.K. is facing an historic hit to real incomes that will weigh on demand and growth and start to pull down domestically generated inflation, with the energy-price shock this year set to exceed anything seen in the 1970s. The bank doesn’t have a policy tool to make that hit go away, he said.

‘We are facing a very big shock by any historical standard,” Bailey said. “There is a very high level of uncertainty. The task we have is clear, but it’s hard.”