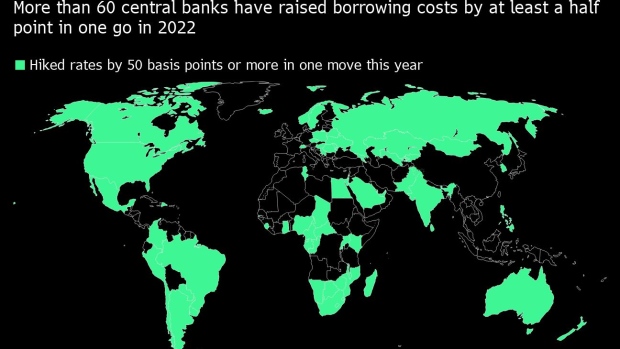 The Bank of England will consider a half-point interest rate hike at its August, quickening the pace in its fight against inflation, Governor Andrew Bailey said.

In his annual Mansion House speech in London this evening, Bailey will also say the BOE may reduce its government bond holdings amassed during quantative easing by between £50 billion and £100 billion in the first year of active sales. It could vote on sales as early as September.

The remarks put detail on Bailey’s pledge to act forcefully if necessary to bring inflation under control. Prices are set to rise over 11% this year, more than five times the BOE’s target, and Bailey said meeting that goal is his primary objective.

‘This means that a 50 basis-point increase will be among the choices on the table when we next meet,” Bailey will say, according to a text of the speech released Tuesday. “50 basis points is not locked in, and anyone who predicts that is doing so based on their own view.”

The BOE built up as much as £875 billion of assets during its quantitative easing stimulus program over the past decade. Some of that portfolio has rolled off the balance sheet as assets matured.

The comments may well be the last from a BOE policy maker before officials hold their August meeting. Investors are all but certain the bank will opt for its first 50 basis-point hike since gaining independence in 1997.

Officials already have increased their benchmark at five straight meetings. That’s taken it to 1.25%, from 0.1% in December. In June they signaled their willingness to act more forcefully if needed.

The Aug. 4 decision will include the publication of the BOE’s plans for balance sheet reduction, known as quantitative tightening. That will ensure a sales plan can begin after a “confirmatory vote” that could be as early as September, Bailey will say.

Analysis carried out with the Debt Management Office suggest the BOE “are currently looking at a total reduction in the stock of gilts held by the APF, which covers both sales and gilt redemptions, of something in the region of £50‐100 billion in the first year,” the speech said. “Market Intelligence suggests that’s broadly in line with what market participants are expecting.”