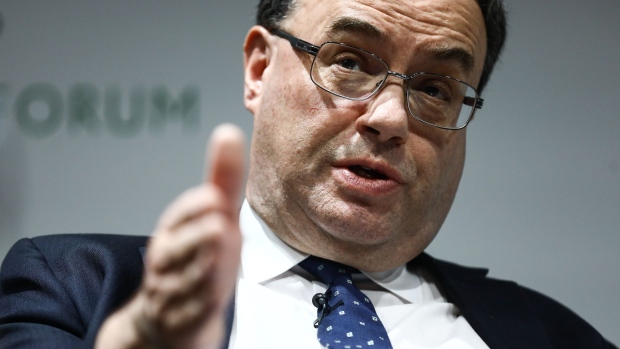 Andrew Bailey will be the next head of the Bank of England after the government chose to replace Mark Carney with the U.K.’s top financial regulator, just as Britain faces the next phase of Brexit.

He’ll start on March 16, with Carney, who was scheduled to leave at the end of January, extending his term until then to allow for a smoother handover. The U.K. is set to leave the European Union on Jan. 31, a deadline that is virtually guaranteed after Prime Minister Boris Johnson was returned to power this month.

Bailey was “the standout candidate in a competitive field,” Chancellor of the Exchequer Sajid Javid said. “Without question, he’s the right person to lead the bank as we forge a new future outside the EU.”

The appointment comes despite recent speculation that Minouche Shafik, a former deputy governor, would get the job. She would have been the first woman to lead the central bank in its 325-year history, and Javid’s choice opens the government up to criticism that it’s failing to address gender diversity at the BOE.

Unlike Carney, who started in 2013, Bailey agreed to serve a full eight-year term. The 60-year-old is in many ways the ultimate BOE insider and was seen as the top contender in every Bloomberg survey of economists. He was once so hotly tipped that online oddsmaker Betway stopped accepting bets on his appointment. His resume includes a stint as the central bank’s chief cashier, whose signature appears on banknotes.

Yet his star was considered to have faded lately after a series of perceived missteps in his role as head of the Financial Conduct Authority, charged with ensuring that financial markets operate fairly.

He was appointed just a day after the FCA was asked by the BOE to investigate the “misuse” of the audio broadcast of some of the central bank’s press conferences that might have given traders an unfair advantage.

He has also had to weather a slew of other scandals as regulator. They include the collapse of so-called mini-bond firm London Capital & Finance, seizing up investors’ retirement funds, the demise of disgraced U.K. stockpicker Neil Woodford’s investing empire, and the gating of M&G Plc’s property fund earlier this month.

“Bailey is the most able and competent BOE official I worked with: by far the steadiest under fire in the financial crisis,” Nick Macpherson, the former head of the U.K. Treasury, said on Twitter on Friday. “He won’t make waves unnecessarily. But his all-round experience will help to steady economic policy at a challenging time.”

Former Chancellor Philip Hammond said he’d search internationally for Carney’s successor, but candidates such as Raghuram Rajan have suggested that the wrangling over Brexit discouraged them from seeking the role. Asked if the views of candidates on Brexit affected his choice, he said the thing that mattered most was their experience.

Bailey will receive 495,000 pounds ($645,000) a year. That’s more than Carney’s salary, but doesn’t include pension and housing benefits that brought Carney’s remuneration up to almost 900,000 pounds. The details of Bailey’s benefit package haven’t yet been made public, though he won’t get a housing allowance.

The chancellor also addressed concerns over the BOE’s independence. Members of his own party have repeatedly attacked Carney for his warnings on the economic fallout of a Brexit -- especially if disorderly. Javid said he wants Bailey to “uphold vigorously” the institution’s independence.

“It is critical that the governor and indeed everyone working with the governor in the Bank of England is independently minded,” he said. The institution should make “whatever decisions that it feels necessary without any interference whatsoever from any government, any politician or any other body.”

For all his experience, Bailey was never part of the central bank’s interest-rate setting committee, meaning his views on monetary policy are largely unknown.

The BOE has often been in limbo since the 2016 Brexit referendum. Uncertainty on the U.K.’s future relationship with the EU led Carney and his colleagues to keep their benchmark interest rate mainly unchanged, cutting once and hiking twice since the vote.

Now, two of the nine-member Monetary Policy Committee are currently calling for a rate reduction, and some banks expect a cut to be delivered in 2020.

There could also be a push in the other direction, with most policy makers signaling a smooth departure from the EU would likely open the way to a series of limited and gradual increases to restrain inflation.

Bailey has managed to keep his views on politics and Brexit uncontroversial enough to be acceptable to both sides. However, he’s also stuck up for U.K. interests, calling on the EU to reverse a plan to block equity traders in their territories from using London exchanges. He promised to take a pragmatic approach to financial issues around Brexit to keep markets calm.

He joined the banking regulator in 2016, when he was lauded by former Chancellor George Osborne as “simply the most respected, most experienced and most qualified person in the world” for the role.

That followed a distinguished career at the BOE, where he held roles including deputy governor, CEO of the Prudential Regulatory Authority and private secretary to BOE head Eddie George -- a role that is seen as a launchpad for leaders. Before that he studied at the University of Cambridge where he received a degree in history and a PhD in economic history.

Bailey is highly regarded for his work a decade ago on Northern Rock, the bailed-out mortgage lender that experienced the first run on a British bank in more than a century. He’s considered a safe pair of hands in a crisis. His wife, Cheryl Schonhardt-Bailey, is a political science professor and American, giving him social ties across the Atlantic.

Bailey will inherit a flagging U.K. economy. Output has dropped or stagnated for the past three months, the worst performance in a decade. Firms have been holding back on investment decisions since the 2016 referendum on Brexit.

Still, navigating that process will be Bailey’s biggest challenge as attention turns to the December 2020 deadline for a trade deal. While the BOE has assured banks and investors that the financial system is as prepared as it can be, it could still be a difficult time if unforeseen problems arise.

--With assistance from Yuko Takeo, Lucy Meakin and Jill Ward.