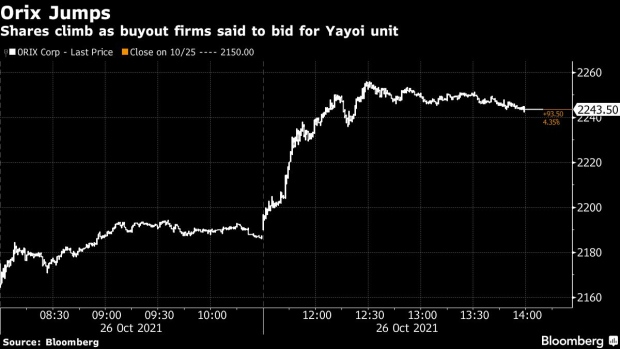 (Bloomberg) -- Bain Capital, Blackstone Inc. and KKR & Co. are among the firms bidding to acquire Japanese software maker Yayoi Co., according to people familiar with the matter.

Japanese financial conglomerate Orix Corp. is seeking more than 200 billion yen ($1.8 billion) for the business management software maker, said the people, who asked not to be identified as the information is private. Orix aims to complete the process by the end of March, they said.

Deliberations are ongoing and Orix could decide not to proceed with the sale. Representatives for Bain, Blackstone and KKR declined to comment.

Although Orix is currently considering a variety of possibilities with regard to Yayoi, including the transfer of shares, no decision has been made, the company said in a statement Tuesday.

Shares of Orix closed 4.4% higher on Tuesday, their largest increase since May 14.

Several of Japan’s biggest deals this year have been in the software sector. The largest to date is Hitachi Ltd.’s $8.5 billion acquisition of U.S. developer GlobalLogic Inc., which was announced in April and completed in July. Panasonic Corp. announced later that month a $7.1 billion deal for artificial intelligence software maker Blue Yonder, which was confirmed in September.

Yayoi, which develops and sells accounting and other business software had sales of about 20 billion yen in the year ended September 2020. Orix bought Yayoi from MBK Partners in 2014 for more than 80 billion yen.