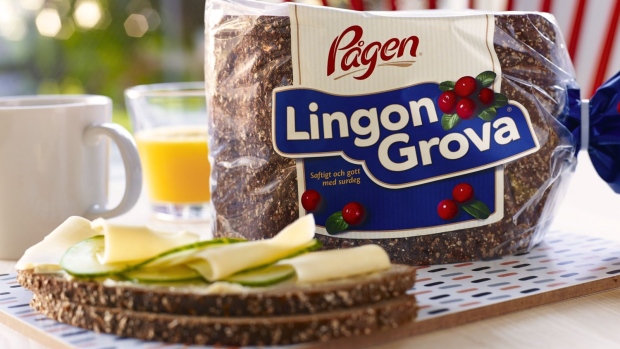 (Bloomberg) -- Sweden’s most-popular breakfast bread will get more expensive after energy prices soared to a record.

Pagen AB, a bakery in the south, will increase prices for its sourdough lingonberry bread next month, after electricity costs tripled over the past year, according to a spokeswoman for the baker.

The firm, dating back almost 150 years, is as much a casualty of global energy and commodity inflation as it is of local geography. Sweden’s aging electricity network means the country’s abundance of cheap wind and hydro power in the north can’t always get to where most people live.

The spread between the most northern and southern price areas -- a quirk in how electricity is priced in Sweden, Norway and Denmark -- has never been wider than in the past few months. Output from several nuclear reactors in the south decommissioned in the past decade hasn’t been replaced, which means a shortage of supplies there. Sweden is spending billions of kronor to fix the problem, but that won’t resolve the issues for several years.

“As I see it, Pagen doesn’t really have any choice than to hike the price of its bestselling bread,” said Torbjorn Iwarson, an independent commodities expert, who has tracked the markets for almost two decades. “The food industry is largely located in the south of Sweden and the nation’s energy policies has made breadmaking and other food production less profitable.”

Customers can expect an increase of about 1-2 kronor for a loaf normally priced at about 25 kronor ($2.73), depending on the margin for individual stores, according to the spokeswoman.

In the north, Polarbrod AB, famous for its flat wheat and rye breads, is investing in wind turbines and is on the road to energy self-sufficiency. “Power prices haven’t had the same impact on our costs this year as on many of our competitors in the south,” said Lars Wikman, responsible for investments in renewable energy for Polarbrod.