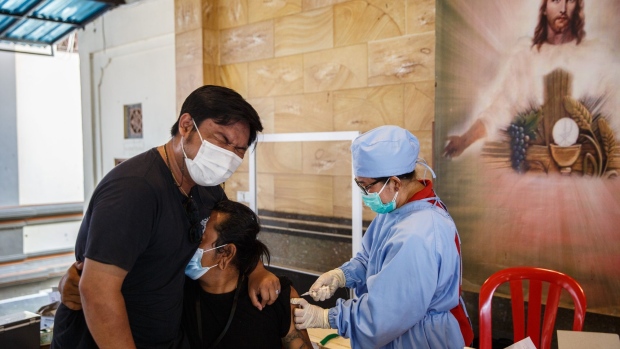 A Covid-19 vaccination in the Canggu area of Bali in May. , Bloomberg

(Bloomberg) -- Tourist hotspot Bali is reopening its doors to foreign visitors for the first time since March 2020, but there are no international flights scheduled for the island just yet.

“Our hope is that those flights will resume soon,” said Gede Eka Sandi Asmadi, spokesman for Bali’s airport operator PT Angkasa Pura I. The airport is waiving landing fees for all airlines through year-end to encourage them to resume international routes to Bali.

With more than half of its gross domestic product reliant on the tourism industry, the pandemic and the resulting border closures have dealt a blow to the island’s economy. Its GDP shrank nearly 40% from March last year while unemployment numbers tripled. Only 43 foreigners entered Bali this year through August, a far cry from the 3.6 million seen in the same period in 2019.

The province is Indonesia’s second-most vaccinated, after the capital Jakarta, as the Balinese took up inoculations quickly in hopes of reopening the island faster. More than 77% of people have received at least their first shots, and 65% are fully inoculated.

The lack of international flights and remaining restrictions on some countries still pose a hurdle.

While Australians accounted for one-fifth of Bali’s visitors in 2019, the largest group, visitors from there are still not allowed to fly directly to the island. Chinese citizens make up the second-largest group at 19%.