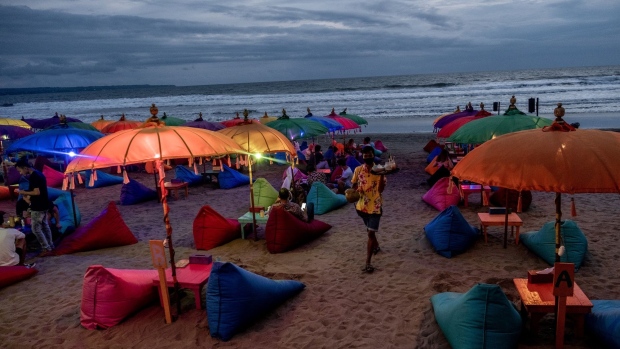 Chinese tourists accounted for one fifth of the total number of foreign visitors in Bali before the pandemic. , Photographer: Agung Parameswara/Getty Images AsiaPac

(Bloomberg) -- Indonesia is planning more flights and social media campaign to lure Chinese tourists to Bali to capitalize on the international reopening of borders for Asia’s largest economy earlier this month.

The Southeast Asian country will enable direct flights from Beijing, Shanghai and Guangzhou to Denpasar and intensify its TikTok campaign for the top holiday destination, according to the government.

“We can’t deny that our 2023 foreign tourist arrival goal will also depend on Chinese tourists,” Tourism and Creative Economy Minister Sandiaga Uno said in a briefing on Tuesday, adding that Lion Air, Batik Air and a Chinese airline were among those preparing scheduled flights between China and the island.

Indonesia joins most Southeast Asian countries in welcoming back tourists from China. The region has been especially welcoming to them in contrast to the US, Italy and Japan that have instead tightened travel restrictions on concerns of China’s rising Covid-19 infections.

In a sign of strong support for the Chinese travelers, Bali governor I Wayan Koster personally welcomed a Lion Air chartered flight from Shenzen carrying 210 passengers on Sunday, marking the return of the tourists to the island for the first time in three years.

President Joko Widodo, who removed all remaining Covid curbs at the end of last year in Indonesia, said that local vaccination coverage and antibody levels were high enough to prevent a resurgence in infections. He has repeatedly said the government would not impose restrictions on Chinese tourists.

Still, Chinese tourists are not likely to come in droves, yet. A survey published last week found that about 40% of Chinese travelers aren’t planning to venture overseas this year despite the sudden easing of restrictions, mainly because of the financial impact of Covid-19 on salaries and the economy.

Chinese tourists accounted for one fifth of the total number of foreign visitors in Bali before the pandemic. This year, Indonesia targets 255,300 Chinese tourists in total — a fraction of the nearly 2.1 million who visited in 2019. The government expects Chinese tourist arrivals to Bali returning to prepandemic levels by 2025, according to the minister.

Bali Deputy Governor Tjokorda Oka Artha Ardhana Sukawati said at the briefing the island used to offer direct flights with 20 Chinese cities using 15 airlines. “Hopefully, we can get all these back.”