'We are living through history': Manulife's Donald on Bank of Canada rate cut

Bank of Canada Governor Stephen Poloz is doing his part to cushion the nation’s economy from the fallout of the coronavirus. Now it’s Prime Minister Justin Trudeau’s turn.

The central bank slashed interest rates by half a percentage point Wednesday and said it is prepared to go further if necessary. However, economists say there are limits to what monetary policy can achieve, and the situation is dire enough to warrant additional help from Trudeau’s government.

“We need a little bit of fiscal stimulus as well to at least support the economy through what is likely to be a bit of a rough patch through the spring,” Doug Porter, chief economist at Bank of Montreal, said by phone from Toronto. “It does make it more powerful if you’ve got both oars pulling at the same time. That can reinforce the message and help support the economy.”

The virus has driven economic activity down sharply in some countries, disrupted supply chains, pulled down commodity prices and prompted a repricing of risk that has tightened financial conditions, the Bank of Canada said, warning the situation could worsen. Trudeau and his finance minister, Bill Morneau, say they’re prepared to help but have stopped short of firm commitments.

“We are very mindful of the fact that an economic impact is certainly being felt in the global economy and is beginning to be felt in Canada, and that’s one of the things we need to turn our attention to and turn our attention to quickly,” Deputy Prime Minister Chrystia Freeland told reporters Wednesday in Ottawa. “I would just say on that, watch this space.”

Earlier Wednesday, Freeland chaired a meeting of a newly formed “cabinet committee on the federal response to the coronavirus disease,” which she said hasn’t yet made any decisions on potential responses.

Economists are speculating about what measures the government could take.

The federal government appears to be taking the risk seriously, setting up a committee of ministers specifically focused on coronavirus, according to Rebekah Young, an economist at Bank of Nova Scotia. “The big question now is how well they target it,” she said in a telephone interview.

Government should focus on major urban areas where the impact could be magnified if the virus spreads, according to Stefane Marion, chief economist at National Bank of Canada. He recommended programs to help subsidize service-based industries that may need to temporarily shut down or send workers home.

“We need to keep activity going in the large metropolitan areas in Canada -- that’s key at this time,” Marion said from Montreal. 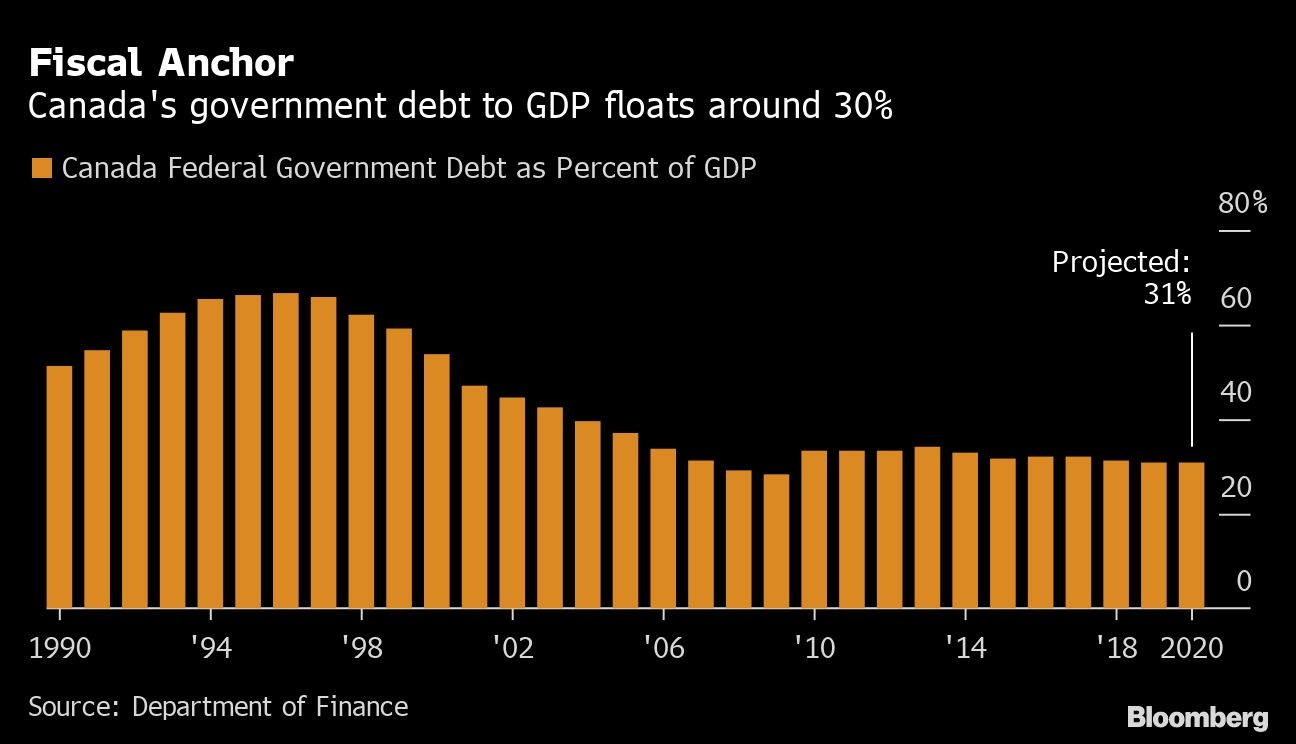 But the biggest challenge for Trudeau is political: His government is already projecting a budget gap near $30 billion this year, even before any new spending measures he promised during last fall’s election.

The Liberals, who are due to release a budget in coming weeks, have also pledged to keep the debt-to-GDP ratio on a downward trajectory. Rolling out an aggressive fiscal stimulus package would mean casting that anchor aside, and wouldn’t come without political cost for Trudeau.

Much will depend on the extent of the slowdown. The base case among most economists is a temporary one, to just over 1% growth this year. In a $2.3 trillion economy, a stimulus package of about $5 billion could boost growth by a couple tenths of a percentage point. Along with the large dose of monetary stimulus just delivered by Poloz, that could be enough if the downturn is temporary.

But if the world economy is headed to a recession, the federal government will need to take the response over from the central bank. Relying solely on lower rates could fuel financial stability risks in Canada, where household debt levels are among the world’s highest. Aggressive cuts could also exhaust whatever ammunition the Bank of Canada has left.

Fiscal stimulus targeted directly at individuals and companies is seen as a more precise tool. And it has the added benefit of boosting confidence, based on the perception the government is prepared to deploy its resources to support the economy.

--With assistance from Kait Bolongaro.