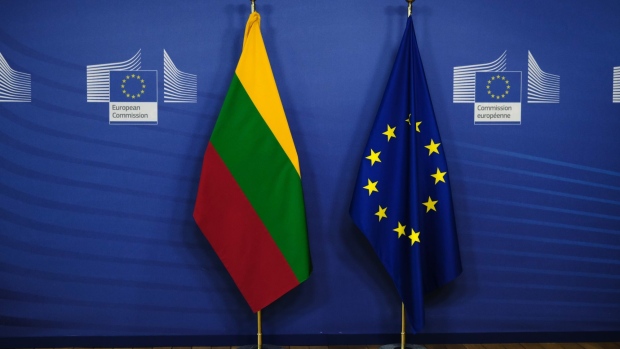 A Lithuanian national flag and a European Union (EU) flag ahead of a meeting between Lithuania's prime minister and the President of the European Commission, in Brussels, Belgium, on Thursday, June 3, 2021. Photographer: Alexandros Michailidis/SOOC/Bloomberg , Bloomberg

(Bloomberg) -- Latvia and Estonia joined Lithuania in abandoning the so-called 16+1 eastern European framework with China, which once threatened to divide the European Union in its relations with the world’s most populous nation.

The format between China and eastern members took shape in 2012 as a platform for Beijing to forge ties with 16 eastern European countries, cooperating on infrastructure and development projects. Greece joined in 2019, making it 17+1 for a time. Critics saw the arrangement as a way for China to exploit EU members who felt overlooked by Brussels.

“Latvia will continue to strive for constructive and pragmatic relations with China both bilaterally, as well as through EU-China cooperation,” the Foreign Ministry in Riga said in a statement on Thursday. Estonia issued a statement with similar wording.

Estonian Foreign Minister Urmas Reinsalu late Thursday told public broadcaster ERR “an element” of the decision was due to China’s failure to condemn Russia’s invasion of Ukraine. The ministry earlier said that Estonia hadn’t actively participated in the format since last year.

Russia’s invasion triggered a broad re-think in relations with China. But even before the war, enthusiasm for the cooperation mechanism waned as some countries bristled at widening trade balances with China -- and the Asian superpower’s failure to deliver on pledges of billions of dollars in investments.

“We respect and support Estonia and Latvia’s sovereign decision to no longer participate in the 16+1 initiative,” State Department spokesman Vedant Patel told reporters Thursday. Countries have expressed deep concern about China’s strategic alignment with Russia, Patel said, adding that aligning with partners in Europe was a “pillar of this administration’s approach” to China.

In an apparent snub to China, the three Baltic nations sent neither their presidents nor prime ministers to the last in-person summit last year, sending lower-level officials in their stead.

Lithuania, which became embroiled in a dispute with China after allowing Taiwan to set up a representative office, pulled out of the group last year, saying the cooperation wasn’t delivering on its promises.

A delegation led by Lithuania’s deputy transportation minister visited Taiwan this week in the wake of US House Speaker Nancy Pelosi’s trip there earlier this month. Chinese Foreign Ministry spokesman Wang Wenbin pledged Thursday to “act resolutely in response to the egregious provocation of certain individuals in Lithuania.”

Beijing had withdrawn its ambassador to Lithuania, a nation of 2.8 million, and imposed an effective trade ban on the EU member state, reacting to the representative office under the name of Taiwan. China regarded the development as a violation of its sovereignty.

The European Union took China to the World Trade Organization last year over its coercive practices against Lithuania and some exporters from other member states. China’s measures included restrictions on exports to the Baltic nation, and Chinese companies canceled orders from Lithuanian firms.