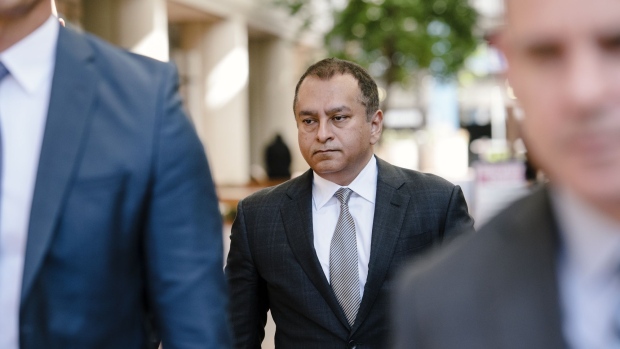 Sunny Balwani, former president and chief operating officer of Theranos Inc., leaves federal court in San Jose, California, U.S., on Wednesday, Oct. 2, 2019. The defunct blood-testing startup which was once valued at as much as $9 billion unraveled amid what prosecutors describe as a massive scheme masterminded by founder Elizabeth Holmes and Balwani to mislead investors, doctors and patients. , Bloomberg

(Bloomberg) -- Elizabeth Holmes took the stand for the fourth day, defending herself on Monday against criminal fraud charges in California.

The government has already spent 10 weeks laying out its case with witnesses who depicted Holmes as deeply deceptive. In her initial testimony, the 37-year-old discussed the youth and idealism required to start Theranos Inc., which collapsed in 2018. She is being questioned by her attorney and has yet to be cross-examined by prosecutors.

When Theranos was enjoying more success as a company around 2014 and 2015, Holmes said she described to Ramesh “Sunny” Balwani, her former boyfriend and second-in-command at Theranos, a presentation she gave at an event for women in engineering. “I was talking about all these girls comping up to me and saying they were inspired.”

In a text, Balwani told her, “I have molded you.”

Holmes testified that Balwani “would get very angry with me and sometimes come up to our bedroom and force me to have sex with him when I didn’t want to.”

That persisted throughout the course of their relationship from 2005-2016, she said.

Holmes said Balwani, who had started out as her mentor, was often critical of her. “He felt like I came across as a little girl and he thought that I needed to be serious and not so giddy.”

Holmes said she believed that if she lived by Balwani’s tenets, she’d be successful, but while she tried, he was very critical of her.

“He would get very angry with me and would yell at me that he was so disappointed in my mediocrity.”

“He told me that I didn’t know what I was doing in business, that my convictions were wrong.” He told her that she “needed to kill the person I was” to become an entrepreneur.

“He was very prescriptive. He said that if I wanted to be a good entrepreneur, I needed to spend all of my time on the business,” including not sleeping very much and eating “foods that would make me only pure, having a very disciplined and intense lifestyle.”

Holmes testified that she’d been raped while she was studying at Stanford University -- and that the experience motivated her to concentrate on developing her blood-testing startup.

“I decided to pour myself into building Theranos,” she told the jury Monday in federal court in San Jose, California.

She said she was encouraged to pursue her business aspirations by Balwani, whom she had met while studying language in China the summer before she started at Stanford when she was 18 and he was 38.

“I understood that he’d been a really successful business person” who’d worked with Bill Gates and sold a software company.

After telling Balwani about the rape, he  told her “I was safe now that I met him.”