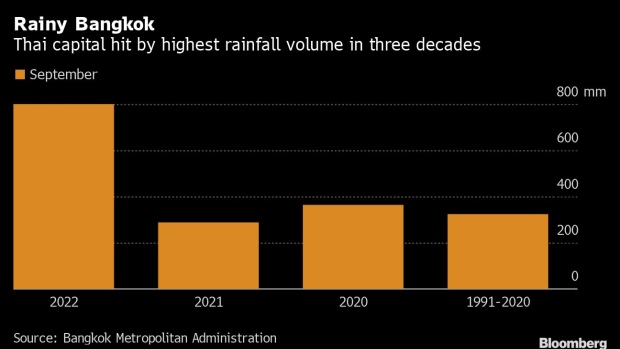 Pedestrians walk along a street after a torrential downpour in Bangkok, Thailand, on Monday, Oct. 3, 2022. Thai authorities are considering imposing a congestion charge in the capital Bangkok to ease traffic snarls and air pollution, making it potentially the second major Asian city to implement such a policy. , Bloomberg

(Bloomberg) -- Authorities in Thailand’s capital urged residents to work from home for the rest of the week in view of forecast for heavy rain as the city of 10 million battles flooded streets and traffic snarls triggered by unusually high downpours in recent days.

Companies should allow employees to return home earlier or allow them to work from home this week while authorities drain rainwater from streets and accelerate deployment of two million sandbags to build barrages against fresh flooding, Bangkok’s deputy governor Tavida Kamolvej said at a briefing on Wednesday.

Bangkok is set for heavy rainfall until Saturday and may also be affected by the release of water from dams, Tavida said.

Bangkok is among the 72 Thai provinces hit by the worst flooding the Southeast Asian nation has seen in years due to seasonal storms that’s also raised water levels in rivers and reservoirs. Popular tourist destination Chiang Mai in the north and a large swathe of crop land in the northeast are also underwater, threatening to fuel food prices and hinder a nascent tourism recovery.

The Thai capital recorded 801.5 millimeters of rainfall in September, more than twice the 30-year average of 323 millimeters between 1991 and 2020, according to official data.

Thailand, a major producer of rice, rubber and sugar, is often ranked among the world’s most vulnerable to climate change. While the country was battered by flooding in 2019, 2017 and 2011, some regions suffered severe droughts in the past decade.

The losses from flooding is seen as much as 10 billion baht ($268 million) though it has yet to deal a big blow to the overall economy, according to The Joint Standing Committee on Commerce, Industry and Banking.