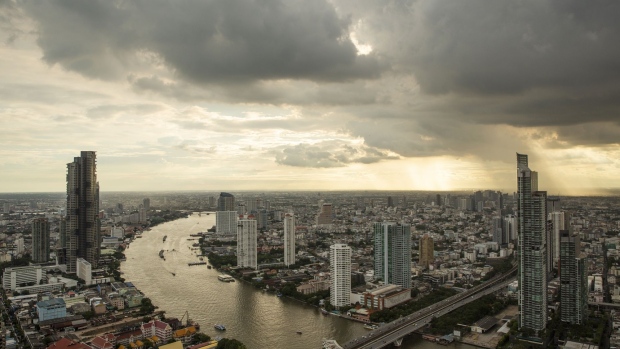 A view of the Bangkok skyline from the Sky Bar at Lebua at State Tower, operated by Lebua Hotels & Resorts Co., in Bangkok, Thailand, on Thursday, Oct. 1, 2020. A slew of luxury hotels opening in Thailand amid the Covid-19 pandemic are pinning their hopes on a government plan to lure high-spending tourists, betting those seeking five-star quarantine will help cushion the devastation wrought on the travel industry. Photographer: Andre Malerba/Bloomberg , Bloomberg

Residents in the city of more than 10 million should work from home if possible, or switch from personal vehicles to public transport options if they need to commute, Bangkok governor Chadchart Sittipunt said in a statement on Tuesday. Authorities will seek to control activities causing dust particles such as outdoor burning, construction and combustion from truck engines, he said.

Air quality in the Thai capital has been mostly at unhealthy levels since the weekend with authorities warning that the hazardous dust particles, known as PM 2.5, may exceed safe levels again later this week. While the city’s air quality was moderate on Wednesday, it’s set to slide to unhealthy levels from Thursday, according to forecasts by the World Air Quality Project.

Bangkok and other Thai cities have grappled with poor air quality in recent years, with pollution tending to get worse in the dry season around December to February. The worst phase of air pollution this year will be seen next month, and the menace may persist until April, a pollution control department official told reporters on Wednesday.

Authorities will “intensively monitor” pollution levels in Bangkok from now until the end of February, according to Chadchart. For now, schools in the city should still open as normal, he said.

Some cities in Thailand’s northern region and those near Bangkok are battling unhealthy air quality on Wednesday morning, official data showed. Bangkok and 23 other provinces are on the list of cities with high levels of PM 2.5, according to the Ministry of Public Health.

Health authorities across Thailand’s 77 provinces will closely monitor PM 2.5 levels and will open emergency operation centers in any province where unhealthy readings persist for more than three days, according to Opas Karnkawinpong, permanent-secretary in the Health Ministry.

Patients with air pollution-related diseases in Thai hospitals have more than doubled to nearly 213,000 this week, from about 96,000 last week, due to the worsening air quality, Opas said.